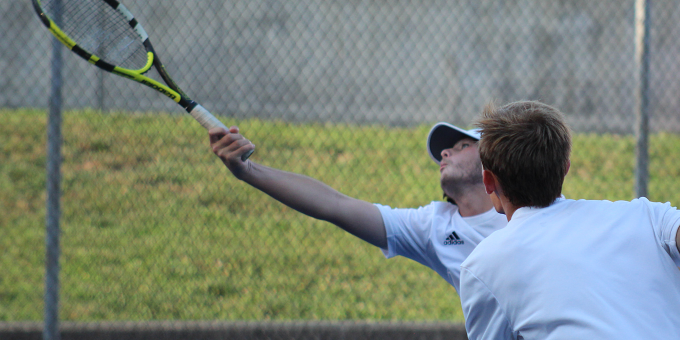 BEDFORD – Making their late season debut, Bedford North Lawrence’s Nathan Pemberton and Caleb Jones made up for lost time with a little extra work and a key victory in the home-court opener.

Pemberton and Jones, hitting shots for the first time in over a week after missing time because of virus protocols, won a first-set tiebreaker en route to a straight-set triumph as No.2 doubles, igniting the Stars to a 4-1 victory over Linton on Thursday afternoon.

The Stars swept the doubles while breaking through for their first win of the season. Pemberton and Jones conquered Wyatt Bredeweg and Justin Brown 7-6 (7-3), 6-3.

“This was a really good night for us, and the guys needed it,” BNL coach Chris Kurtz said. “We have really missed having Caleb and Nate on the court, as both players and leaders. They haven’t hit tennis balls in a long time, so to come out with a win was a bonus.”

Cameron Gratzer and Jayden Kemp won at No.1 doubles with a 6-2, 7-5 victory over Devin Littlejohn and Nathan Frady.

BNL was also strong in singles with Steven Graham decking Holden Nagy 6-1, 6-2 at No.1, with Carter Kimmel playing his best tennis of the year while rolling to a quick 6-0, 6-0 triumph over Ben Wade at No.3.

The Miners posted their victory at No.2 singles with Grant McGill stopping Gavin Baker (who was also just back from a virus absence and made his varsity debut on short notice) by a 6-3, 6-1 count.

“We put Gavin right into the varsity lineup for his first match of the season,” Kurtz said. “He hasn’t been on a stage quite like this before and the nerves were there, but he stood up to the challenge just like so many other new players have for us this season. I’m really proud of him.”

BNL (1-2) will host its own invitational on Friday,