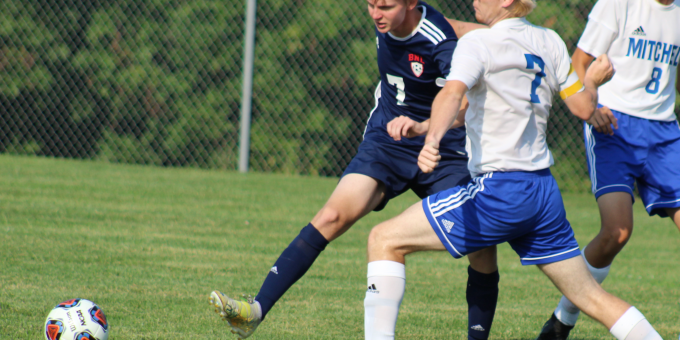 After playing as a junior-varsity goalie last season, Burgess shifted to a front-line attacker for his senior campaign, and he celebrated with a first-half hat trick while powering Bedford North Lawrence to a 5-0 triumph over Mitchell in the season debut on Thursday.

Josh Anderson scored twice for the Stars (1-0), who totally dominated possession and action while failing to surrender a shot on goal. On the other end, where the ball was contained the majority of the time, BNL peppered Mitchell goalie Nate Robertson with 20 shots. Burgess could sympathize, although he helped make Robertson’s life a little miserable with his three goals.

The first Burgess goal was absolutely beautiful and virtually unstoppable. BNL’s Kaleb Sowders gathered a ball in the deep right corner and made a sensational crossing pass to the far post. Burgess timed it perfectly, heading the ball down and into the left corner of the goal. That gave BNL a 2-0 lead with 21:39 left in the half.

“He saw me at the back post, and when I saw him, we connected,” Burgess said. “Just to get some good passes, play with the team, it was great. The passing and vision everyone had was just immaculate. The balls kept coming through and we kept getting opportunities. That’s how we won. We started the season right.”

Anderson started the scoring by gathering a free ball at 15 yards and cracking a shot home at 27:03. Burgess added his second with a 25-yard missile from the left wing at 6:45, and he closed the half with another long-range shot with 29 seconds remaining.

Anderson added the final goal at 22:55 of the second half. The Stars could have had more, but four shots hit the post. The Bluejackets (0-2) were forced into a total defensive posture with no substitutes available.

“There are things we could have done a lot better, but overall we moved the ball well,” BNL coach Logan Jackson said. “I wish we could have finished more. In the final third, we need to be more aggressive, going after it and making runs. But we possessed it well and won the 50-50 balls in the midfield. And we definitely wore them down.

“We almost passed too much at times. Maybe we should have pushed it a little more. But that’s OK. That was the emphasis.”

BNL will visit Scottsburg on Monday.