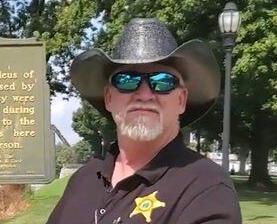 Tackett was found dead in a vehicle on County Road 300 North and County Road 225 East in Sullivan.

According to Sheriff Cottom on Saturday morning, the department received a call that Tackett suddenly left an apartment he shared with his girlfriend. Sheriff Cottom says it wasn’t clear if he intended to leave town or hurt himself.

Tackett was reported as a missing person. Alerts were sent to area law enforcement with both information about Tackett and his vehicle.

Investigators checked with both in-town and out-of-town family members to see if anyone had talked or seen Tackett. They also attempted to locate his truck using the vehicle’s GPS.

On Monday afternoon Sheriff Cottom was searching an area near County Road 300 North and County Road 225 East when he found Tackett’s truck. Tackett was found deceased inside.

Evidence from the investigation shows Tackett died from a single self-inflicted gunshot wound.

The video was published on YouTube last Thursday morning showing who EYLP says is Tackett arriving in Henderson, Kentucky to meet the alleged girl.

The group also posted text messages and photos that were allegedly exchanged between Tackett and the EYLP member posing as the girl.

The EYLP says the individuals captured in their videos made initial contact with their person posing as a young girl through dating apps.