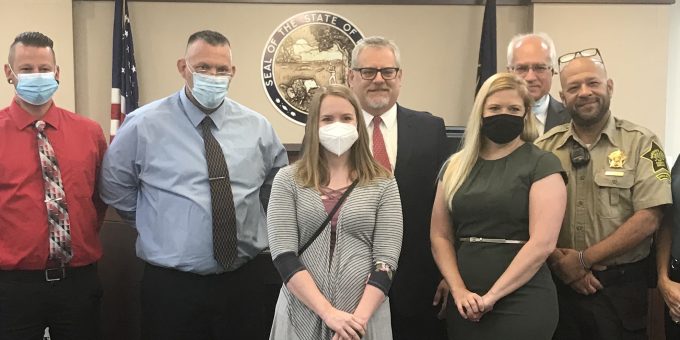 LAWRENCE CO. – The mission of the Lawrence County Superior Court I Problem-Solving Court is to end the cycle of domestic violence through timely, focused, and collaborative response.

Tuesday morning, was a celebration of the hard work of Ryan Emmons, and Jeremy Wheeler who graduated from the program.

Ryan Emmons was in the program for 692 days and Jeremy Wheeler completed 896 days. Both were supported by several agencies to help them address all aspects of their recovery.

The Lawrence County Problem Solving Court is the only certified program in the State of Indiana. Since its inception in 2014, the results are proving this program is working.

Lawrence County officials identified a need for the program in 2011 after the Center for Disease Control released a report about siting a large number of domestic violence arrests within the community. During 2011-2012, Indiana recorded 64 domestic violence-related deaths. Two of those were in Lawrence County.

“The program is essential because the team is able to work on specific issues of those who are arrested, like power control, thinking, and their belief system to hopefully reduce the reoccurrence of domestic violence,” said Joe Dibert who is a case manager with the Lawrence County Probation Department.

The success of the program is noted when the men and women in the program do not re-offend, stay clean from alcohol and drugs over a long period of time, and changed their value system and gain their lives back,” said Dibert.

It is a long commitment. Changes do not happen overnight. There are three phases of the program participants must complete before graduating.

The program uses evidence-based practices and the results after seven years are promising and impressive.

The Lawrence County program continues to focus on the offender. However, with the court system in Indiana addressing victims’ rights in criminal cases, there is now a focus on including victims in this process. Especially, when many of the victims remain in a relationship with the abuser.

Judge Plummer is hoping for even better results in the next five years.

“We are trying to pave the way in reforming these individuals and do our part in developing a good model so that other counties and states will follow our lead,” said Judge Plummer.

Without the cooperation of Lawrence County’s Prosecutor’s office, this program would not be in existence, and there are several other players that have made the program a success. They include the Lawrence County Public Defenders Office, Lawrence County Probation Department, Centerstone, and community partners such as Hoosier Uplands.