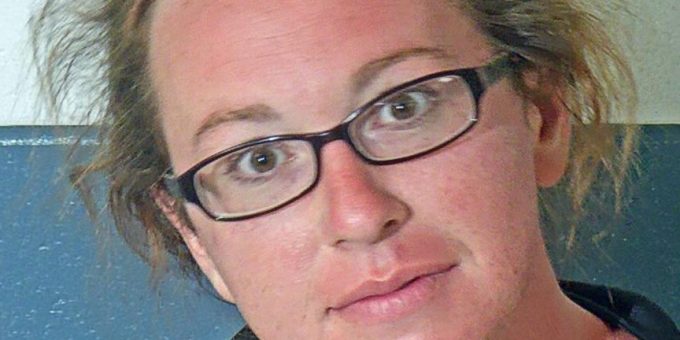 BEDFORD – A Columbus woman was arrested after Lawrence County Sheriff’s Department deputies were called to Free Spirit Campgrounds early Sunday morning after a report of a woman screaming near the entrance of the campgrounds.

When deputies arrived they found 31-year-old Kayla Branum walking back and forth at the entrance of the campgrounds.

Officers asked if she needed assistance and she refused to speak to the officers.

Branum told the officers she was dropped off by someone and was outside talking to God.

The officers told Branum they were concerned about her wellbeing because she was pacing in the roadway in the dark.

She then told an officer she was homeless. When furthered questioned by the police, she refused to answer.

Branum eventually complied to the officers questioning and explained she was staying with her brother but refused to give officers his name or which campsite he was staying in.

An ambulance was then called to the scene to conduct a medical evaluation on Branum. Once the ambulance crew arrived she refused treatment and refused to cooperate with medical personnel.

Officers were unsuccessful in their attempts to contact Branum’s family members and was offered a ride to another location but she denied the request and continued to ignore questions and or receive assistance.

Branum refused officers request to stop when she crossed the street into a neighboring yard and stated she needed to continue to talk to God as she continued her pacing.

After approximately two hours of trying to assist Branum, she walked over to an officer’s car and attempted to get inside.

Police orders were given to stop and put her hands behind her back. Branum refused and gave resistance, however Branum was handcuffed and placed in the police car and transported to jail. Once at the jail, Branum refused to exit the patrol vehicle. She was arrested on charges of disorderly conduct, resisting arrest, and unauthorized entry to a motor vehicle.