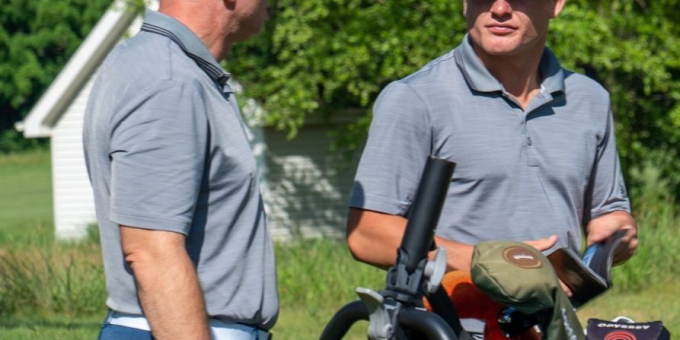 BEDFORD – When Mike Wright took over Bedford North Lawrence boys golf in 1999, only the fifth man to hold that position in program history, his mandate was simple: Don’t screw it up. He did more than that.

After a 23-year career that included five team state finalists, Wright resigned on Monday, shedding his BNL wardrobe after taking a teaching position at Brownstown. His successor will have the same challenge Wright faced when he followed in the footsteps of Bob Lee, Max Ramey, Bob Masterson and Frank Wintin. Big shoes to fill.

Wright, BNL’s longest tenured coach, guided the Stars to seven Hoosier Hills Conference titles, six sectional championships and three regional crowns during his two-plus decades at the helm. In addition to the team accolades, he also helped nine individuals qualify for the state finals. He took very little of the credit for the success of a program that ranks among the best at BNL.

“I don’t think I totally screwed up the program,” Wright said. “That was the key when I took over. I’d like to think we had a lot of success. I had very little to do with it, when you are blessed to be at Otis Park in a very supportive golf community.

“The talent is unbelievable for a rural community, for a municipal golf course. It has to be a unique situation, for Bedford to have what it has and the success it has. We’re not suburban, we’re not a country club. We’re Bedford North Lawrence and we just work hard. It was successful long before I took over and it will be successful long after I leave.“

Wright’s decision to switch schools and leave his coaching duties was purely financial and understandable as a 52-year old teacher starts contemplating retirement. He walks away with amazing memories of time spent with his team, with opposing coaches, with the golf professionals who made his job much easier with their cooperation and encouragement.

“It’s the relationships with the players,” Wright said. “We had a lot of good times at practice and the meets. You really get to know the player. That’s really cool in our sport. There is such a bond there.

“The wins and success is nice, but it’s not what I will remember the most. The improvement of a team from one meet to the next is just as satisfying as a really successful team. You want to get everything out of your players that you can get. Sometimes it’s a state finals, sometimes it’s just breaking 320.”

Wright was quick to point out the contributions of junior high coaches, of the golf pros (from Craig Heibert, to Aaron Harrell, to current Otis boss John Bertges), of teachers like former PGA Tour professional Craig Bowden, who made the success of BNL golf a priority.

“I don’t care what sport it is, if you have good people, it makes the varsity coach look a lot better,” he said. “That’s what I had with golf. The resources are available if the kids take advantage of it. That’s what makes the program successful.”