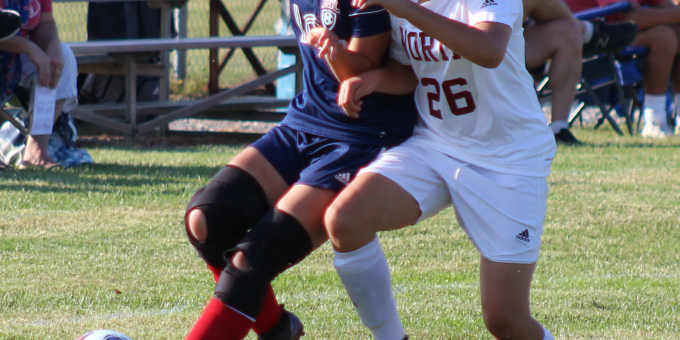 With a seriously outmanned roster, with available players disappearing as rapidly as a magician’s assistant, the Stars started with the bare minimum and finished with no shot (literally and figuratively) as Bloomington North cruised to a 10-0 victory in match shortened by 20 minutes with the new mercy-rule adjustment.

North’s Chloe Hendrix-Petry scored four goals, all in the first half before she departed. BNL’s story was the lack of bodies, thanks to contact tracing and various mid-game ailments and injuries. By the final horn, the Stars were playing with only 8 players on the field. That’s three shy of the normal lineup.

BNL (0-1-0) started with 11, with four (including two starters) sidelined over the last five days by the virus protocols. After a solid first 20 minutes, the Stars dropped like flies on a bug zapper, thanks to heat and hobbling. They were forced to a totally defensive posture, hoping to limit the damage.

“We worked with what we’ve got,” first-year coach Jackie Dufresne said.

Hendrix-Petry struck quickly for the 1-0 lead at 34:35, although the score stayed static at that point before a scheduled water break midway through the first half. After the brief respite, the Cougars exploded for six goals.

“The first 20 minutes exceeded my expectations,” Dufresne said. “After the quick goal, we held them. Then after the water break, I’m not sure what happened, but we started to fall apart.”

Hendrix-Petry completed her hat trick and added a bonus goal, while Sarah Goldsworthy, Emily Andrews and Isabelle Himebaugh all tallied for North. In the second half, the Cougars added goals by Sonia Butske, Himebaugh and Alex Mast as they maintained their level of attack.

“That’s what we tried to do,” North coach Jeff Thomas said. “And that’s not to disrespect BNL. That’s actually respecting them, to go out and play as well as we can – for our benefit as well as their benefit. No one wants to be on the long end of a score like that. We know what it feels like. You have to play close to your capacity regardless.”

BNL, with an overwhelming disadvantage, couldn’t generate any offense or shots. Goalie Crystal Webb was under constant pressure, while freshman Cora Thomas and sophomore Sydney Hallatt did their best to solidify the makeshift back line of defense.

“There were a lot of first-game jitters,” Dufresne said. “Hopefully we can get past that, talk about things we did well, some improvements, put this game in the past and move forward. We have to be flexible and work with what we’ve got. We kept pushing and kept fighting.”

BNL will have time to regroup and work on the numbers, returning to action on Aug. 24 against Floyd Central.