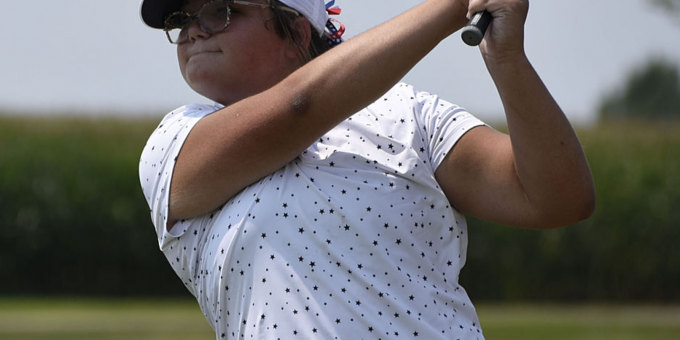 BEDFORD – Competitive golf, legend Bobby Jones once quipped, “is played mainly on a five-and-a-half-inch course, the space between your ears.” Bedford North Lawrence freshman Ellie Horton is starting to figure out how true that comment can be.

Horton carded four pars on the front nine of Otis Park during Monday’s home debut, and she was one of three Stars to post a score of 47. Some felt better about that number than others. The total that mattered most was BNL’s 191 team tally during a dual-match loss to New Albany.

Paced by Kennedy Lee’s 4-over 41, the Bulldogs recorded a 177-191 victory as the Stars took a step backward from recent improvement. Horton, Chloe McFaddin and Kenley Craig all came to the clubhouse with those identical 47s for BNL.

How can the same scores create different responses? Attitude and expectations. Horton, who can be her own worst enemy with self criticism, viewed the four pars (holes, 1, 4, 5 and 7) as positives.

“Toward the end, my confidence got so much better,” Horton said. “I let loose and played better. It’s my mental state. I need to work on myself. As soon as I get there, I will start to shine.

“I was so nervous, being the only freshman in the starting five is a lot of pressure, especially when you’ve been wanting to play for so long. I’ve looked up to all these girls forever, and getting to play with them is just so fun.”

“The worst part of her game is the mental part,” Johnston said. “She beats herself up. Once she realizes she can be a really good player, it will all come together.”

Livvy Bogdon posted a 42 and Sarah Jefferson added a 44 for the Cougars.

BNL will visit Seymour on Tuesday.