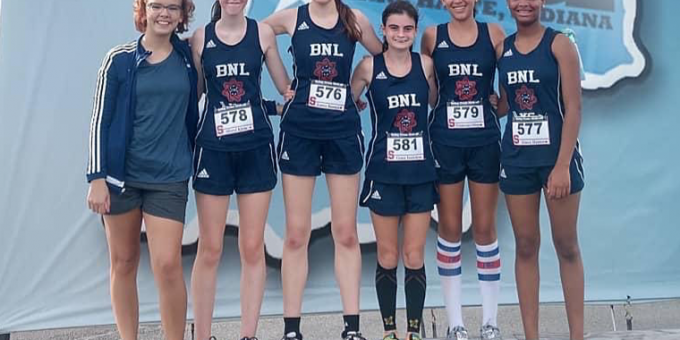 BNL finished 28th in the team competition in the 30-team field with 815 points. Chesterton won the meet with 72 points.

“This meet is all about giving us a starting point for the season,” BNL coach Jill Vance said. “I don’t worry too much about the actual times, as I know they’ll only get faster from here. But it’s a useful benchmark and a low-pressure intro to high school racing for the freshmen.

“I was happy to see Emma drop two minutes from her time at the meet last year. And I thought Francesca had a really solid opening time for her high school career.”

Chesterton’s Bailey Ranta won the race (on the course that hosts the IHSAA state finals) in 19:27.1.

“We did well for a first meet,” BNL coach Jon Calhoun said. “Half of our team were freshmen (because of current virus quarantines and contact tracing), and we did better than last year starting out. Times were faster.

“We had some great competition, many top ranked teams. However, I felt like our guys battled, especially that last couple of kilometers. Our team is not at full strength because of injuries, and I am excited to see where we go.

“My star athlete of the race is Alex. It was his first race and he kept battling and passing individuals, especially that last two kilometers of the race. We know we have work to do to make our team goal of making it out of the sectional, but this was a promising first step in the right direction.”

BNL will visit Seymour on Thursday, then host its annual Scott Hiles Invitational on Aug. 23.