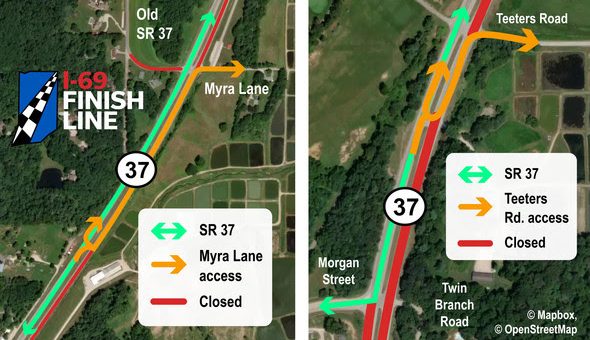 MORGAN CO. – State Road 37 northbound is expected to join southbound traffic later today on the new pavement north of Morgan Street. Two lanes of S.R. 37 – one in each direction separated by concrete barriers – will remain open for local traffic north of Martinsville as the new I-69 is built in phases.

Due to elevation changes between the new and old roads, S.R. 37 northbound access to and from three local roads will change following the traffic shift. Temporary traffic patterns are expected to remain in place for a few weeks.

Myra Lane and Teeters Road may continue to turn right onto S.R. 37 northbound. Left turn movements to and from S.R. 37 southbound remain closed.

Twin Branch Road access to S.R. 37 will also be closed. Drivers may access the area from the south using S.R. 44. See the maps below.