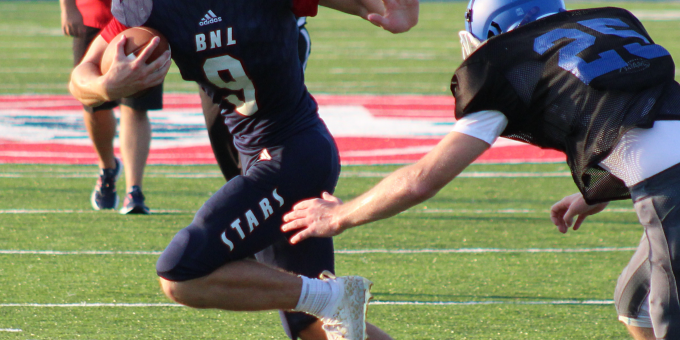 BEDFORD – On the grading scale, treating the preseason scrimmage like a mid-week quiz before the more brutal mid-term exam, Bedford North Lawrence earned passing grades. A for effort, for intensity. Lower marks for other aspects. But the real test is a week away, when the marks count.

The Stars answered a lot of questions during their public debut against Mitchell on Friday night, dominating the final two sets and scoring a total of eight times. That matched the number of penalties, which means BNL will have plenty of momentum and talking points for improvement before the 2021 opener.

With quarterbacks Brye Lewis and Memphis Louden splitting time and sharing equal glory, the Stars showed flashes of offensive explosiveness. With the Bluejackets struggling to execute the center-to-quarterback shotgun snap on multiple plays, BNL allowed only two scores. That’s a ‘win’ in most books, although the reality of the outcome will become much clearer in the regular-season openers for both teams.

After an opening 15-play offensive series that included two turnovers, BNL settled into much smoother execution. Blame it on nerves. The Stars were like a kid guzzling energy drinks, amped up and erratic. From that point, in the goal-line scenarios and the second 12-play set, BNL was electric.

“The first series our execution wasn’t very good,” BNL coach Derrick Barker said. “I think we were wound up a little bit, the first game and everything, some pent-up nerves. Once we settled down, it got a lot better.

“I really liked the effort, the intensity, the desire to make a play and make a block. I saw great effort.”

BNL’s first set started with a thud as Louden failed to connect on an option pitch and the Jackets recovered the fumble. After Lewis completed two passes (to Grant Dalton for 20 yards and Colton Staggs for 14, setting up a Lewis keeper from a yard out), he threw an interception as Mitchell’s Cade Wigley stepped in front of a high pass over the middle. Grade for Mitchell: A for achievement.

“We lost that a series, we got beat,” Barker said. “After that we answered. It was definitely a success.”

BNL raised its level of aggressiveness, recovering two fumbles during the Mitchell offensive series and then scoring four times in the goal-line set. Lewis pranced home with an option pitch from 6 yards, Dylan Nikirk bolted over from 10 yards, and Lewis hit Dalton on the next play in the right corner of the end zone. The Stars were guilty of penalties on three straight plays, then still scored on the last play of the set when Lewis hit Nikirk from 22 yards.

BNL’s Jake Terrell pounced on Mitchell backup quarterback Kale England for a sack during Mitchell’s 10 plays from the 10, but a personal foul penalty set up Nick Mundy’s 2-yard score for Mitchell’s first touchdown.

“We played good, sound defense at first, turned them over twice, and in a game that’s a lot of momentum,” Mitchell coach Troy Pritchett said. “When Bedford started getting the penalties, it got in our heads. From that point on, we were mentally weak, and we didn’t bounce back. We quit executing football plays and got that deer-in-the-headlights look. Once we got fatigued, and lost our mental focus, things didn’t go well for us.”

In the final set, 12 plays from the 35, BNL scored three times. Louden hit Kole Bailey for 28 yards and crashed over from the 5, and Lewis lofted a 7-yard TD to Dalton. He found Bailey for a beautiful 35-yard strike on the final play.

Louden was 5 of 9 passing for for 66 yards and 1 touchdown. Lewis was 7 of 9 for 124 yards and 3 TDs. Lewis also scored twice on the ground. Bailey caught 4 passes for 85 yards. Good grades. But the Stars were flagged 8 times for 79 yards. Failing grades for discipline.

“Both quarterbacks made some really good throws,” Barker said. “I saw great decisions as far as who to throw to, when to take off running. And you have to credit the offensive line.

“But we have to cut down on the penalties, the mental mistakes, getting carried away when we make a good play, letting outside mistakes bother us. We have to handle emotions.”

Mundy was the expected and obvious highlight maker for the Bluejackets. He completed 9 of 12 passes for 66 yards and ran for 50 yards. Mitchell’s main issue with its scripted offense was the bad low snaps – a fixable problem – that foiled at least six plays before they could be executed. Mundy, who threw an 18-yard TD to Keaton Pritchett on the final play, will get his hands on the ball a lot more when Mitchell starts the regular season at Edgewood on Aug. 20.

“We struggled with our snaps,” Pritchett said. “That’s something we have to fix, that kept us from getting our plays off. But the scrimmage was good for us. It was time to see what we did against another team. It showed our mental weakness.”

BNL will visit Martinsville for its opener on Aug. 21.