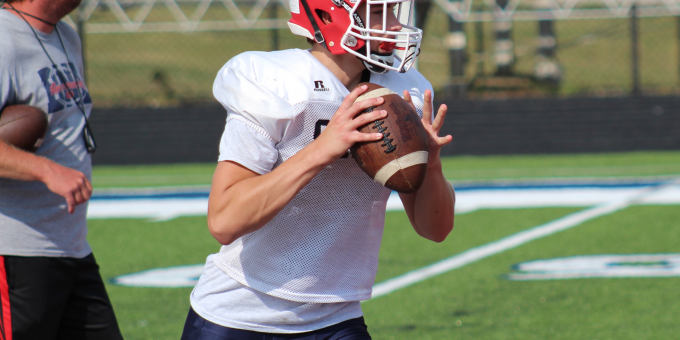 BEDFORD – Bedford North Lawrence’s identity is still secret. Do the Stars, humble and lovable underdogs with a new coach, have any hidden powers or heroes? Will the mild-mannered report as super when the 2021 regular season, speeding on the horizon like a powerful locomotive, bursts on the scene?

The world will soon know. The unveiling will happen on Friday night when BNL hosts county rival Mitchell in the IHSAA-sanctioned scrimmage on the new turf field.

Scrimmages are normally glorified practice sessions with all the importance of those mattress tags warning ‘Do not remove under penalty of law.’ Yeah, whatever. But there is actual significance attached to this final preseason workout. Nobody is exactly sure what distinguishing characteristics BNL will display. The Stars will reveal quite a bit.

Starters? Depth chart? Offensive strengths? Defensive improvements? The Stars are currently the Setec Astromony, with too many secrets, of high school football. Time to quit sneaking and provide some answers.

”It’s definitely more important that usual, to feel out what kind of team we’re going to be,” first-year head coach Derrick Barker said. “It’s something you want set in stone going into the regular season. We’re trying to sort out some positions. We have a lot of jobs up for grabs, whether they are starting jobs or backups. We’ll see who separates themselves, show who wants to be a starter. We can see what we want to keep building on, see what the identity of our team will be.”

Here are a few hints. BNL went 2-7 last season with a lot of young kids thrust into the limelight. The Stars are a year older, more mature, hungrier. They return some familiar names, although they could be assigned new positions.

Quarterback? Brye Lewis, last season’s explosive touchdown and rushing leader, will split time with sophomore Memphis Louden as they compete for the main role. Running back? Zane Anderson, who solidified his place as the starter midway through last season, is the frontrunner. Receiver? BNL has plenty with Ryker Hughes, Kole Bailey, Grant Dalton, newcomer Lyrik Baker and Dylan Nikirk vying for playing time. Linemen? Isaac Jackson, Kline Woodward and Nic Mansker will be the mainstays.

The other side of the ball is more gaseous in nature. BNL has moved people to different positions, and the defensive line is still a work in progress. Mitchell, with its physical running style, will be the perfect test for that unit.

“That’s the side of the ball we really need to start figuring out our depth,” Barker said. “This is to see how we stack up against other competition. We had some scrimmage stuff in the summer, but this is the first time it’s really like live football, going against an opponent that plays a tough style. It will be cool to see how we match up with their physicality, their size and speed.”

For the Bluejackets, with Troy Pritchett entering his eighth season at the helm, the scrimmage is equally paramount. They are set with Nick Mundy at quarterback, with Ashton Pritchett, Aiden Tolliver and Braxton Roll up front. What they need is a leading man at running back.

“We have three or four running backs, and we need one to step up and say they want the ball, that they’ll get the three tough yards,” Pritchett said. “That’s why you play these scrimmages, find out some of these answers. The scrimmage is a great thing for us. We’re facing quality athletes at almost every position, so it gives us a good look on every set we’ve got. We get a lot from it.

“We’re probably as deep as we’ve ever been. But we need someone to step up and become that No.1. We have a lot of competition, and I want someone to take ownership and say that’s mine. Seal the deal. We need the one guy to rise to the top. Play each down like it’s your last down, because you never know when it might be.”

Mitchell’s three-yards-and-cloud-of-dust (or now, a cloud of rubber pellets from the turf) is old school in nature. If it takes 15 plays to score, so be it. In the scrimmage format, with each team granted 15 plays in a set, followed by goal line situations and other scripted events, it might be difficult to look fluid. Nobody is keeping score, but everyone is keeping score.

“We don’t put a lot of emphasis on scoring because we’re a ball-control team,” Pritchett said. “If it takes us 15 plays to drive down and score, we consider that very successful. You only have 15 plays in that first set, so we don’t get caught up in scores. It’s executing our stuff. We’re focusing on penalties, missed blocks, missed assignments, missed tackles.

“The biggest thing we’re looking for is intensity. This time of year, you can get lackadaisical because you’ve been hitting each other. Everyone is a little flat-footed. We really want to see – I don’t care if it’s a scrimmage, game or state championship game – guys play with everything they’ve got on every single play, win that down. That’s what football is all about.”

Mitchell will open the regular season at Edgewood on Aug. 20, while BNL’s debut at Martinsville has been moved back to Aug. 21. For the Stars, tasting success will be a key to establish momentum for the belated opener.

“It definitely matters,” Barker said. “We want to put drives together, execute our plays, know our assignments. Fly to the ball and make good tackles. We want a good feeling when we leave that night.”

Action at BNL will begin at 7 p.m.