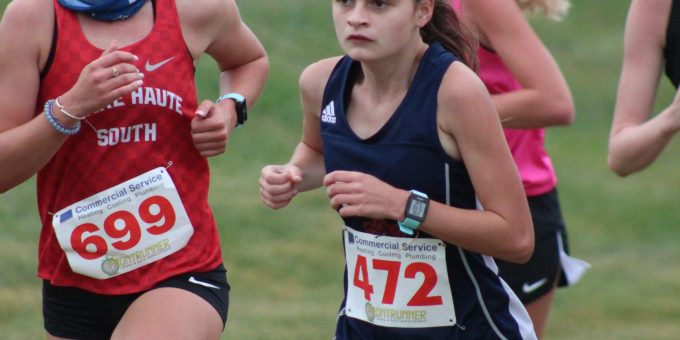 BEDFORD – Beware the quiet one. If Bedford North Lawrences’ Grace Tanksley had her wish, she would smile a lot, say very little as shyness overwhelms her, and let her feet prattle. Oh, if those running shoes could talk, the stories they would tell.

Tanksley is a senior, the lone upperclassman on a short BNL roster. And she’s going to be so far in front, her soft voice wouldn’t carry that far back anyway. She has to lead – by example, by powerful statements, by her time and position – as the Stars race into the 2021 season. Get ready to hear a lot about her.

BNL’s two-time semistate qualifier will be the frontrunner for the Stars as they start the chase. While BNL has only seven runners, four of them have experience and the three incoming freshmen show potential. With Tanksley in pursuit of a record times and a berth in the state finals, the Stars could enjoy a long run.

”It’s a small team, so our big challenge is going to be avoiding injury,” BNL coach Jill Vance said. “We can’t afford to lose people. We have no backups. Grace has had a really good summer training, probably the best summer of mileage buildup and consistency I’ve ever had as a coach. She’s looking really good.”

Tanksley was in pursuit mode behind Autumn Spence last season as Spence advanced to the state finals with a breathless, no-margin-for-error finish in the semistate at Brown County. Tanksley clocked a personal-best time of 20:29.0 in that race while finishing 65th. Her new goals are much clearer and faster.

“Her goal is the state and a sub-20 time,” Vance said. “She would love to grab that No.1 spot (for the program record on the BNL course). I feel she can definitely get that time, although our course is one of the toughest in the state. But on other courses, there’s no doubt we will see a sub-20 time this year.”

“Physically, I think I can do it,” Tanksley said. “But there is a mental barrier I have to learn to break. I need to work on the mental part during a race, pushing myself. I have a lot to lose this last season. It will be pretty tough. I’ve learned how to pace myself, learning how to race. Now I have to put that all in place. Autumn made it by one spot last year, and that was a little scary.”

Cross country is scored as a team collective, and BNL will count on top-five contributions from returning juniors Emma Baumgart and Shelby Slaughter, plus sophomore Ella Peek. The freshmen could also break through, as long as they can keep Tanksley within earshot range. And as long as Tanksley overcomes her fear of communication.

”I’m not the best leader,” Tanksley said with a grin. “I don’t like talking to people. So I have to push myself to be more out there for them.”

The Stars (who will have only five runners ready for the opening race) will start the campaign on Saturday at Terre Haute on the LaVern Gibson course (which hosts the state finals).