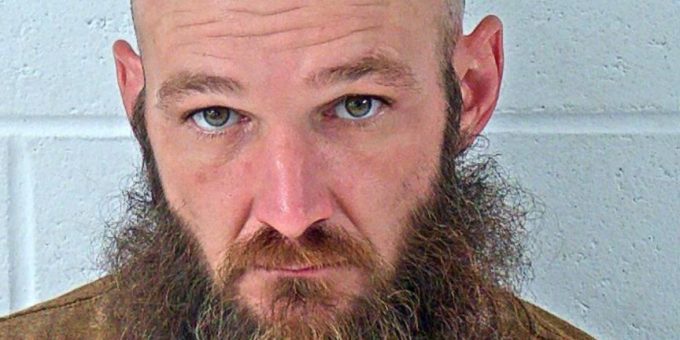 MITCHELL – A Mitchell man was arrested Monday night after a Mitchell Police officer was called to the Shell gas station after a report of a man possibly sleeping in his vehicle at one of the gas pumps.

When police arrived they found 39-year-old Kyle Roberts in a white Dodge pickup truck that was still running.

Roberts was slouched down and appeared to be asleep.  Officers unsuccessfully attempted to wake him by shouting. Officers determined Roberts was unconscious. They entered the vehicle and checked on Roberts breathing. Officers then called for an ambulance.

A second attempt was made to awaken Roberts. Roberts regained consciousness and appeared to be very confused.

During a pat-down of Robert’s pockets officers located a pocket knife.

EMS arrived on the scene and checked Robert’s condition.

Police were given consent to search his truck. During that search, police found a tubular container with a plastic baggie that contained 0.20 grams of crystal meth. They also located a pill container with alprazolam inside it. Roberts did not have a prescription for the alprazolam.

Roberts was arrested on charges of possession of meth, possession of a controlled substance, and driving while a driver’s license was suspended.