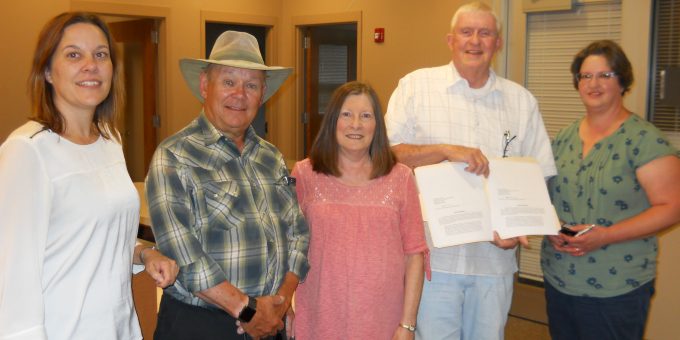 SPRINGVILLE – Perry Township officials received the deed for Springville School last Friday, and Tuesday night the deed was signed over giving ownership to the Springville Community Association or (SCA).

The deed was processed through the courthouse on Monday morning with the proper signatures of North Lawrence Community Schools signing over the building to Perry Township. In the process, it was given to the Surveyors office, Auditors office, and finally to the Recorder’s office.

The keys to the building were turned over to Perry Township Trustee Bob Phillips at Greg Pittman’s office on Monday morning.

The quitclaim deed will be processed in the same manner turning the building over to SCA in the next couple of days.

After a long process in trying to obtain the building that was required under Indiana law, the process has ended.

Township officials were pleasantly pleased with the condition of the building after Dr. Ty Mungle led them on a tour. Officials learned that many of the rumors of damages were not true.

The community members are pleased their goal of obtaining the school has been reached to preserve the heritage of Perry Township. The community will use the building for future events and programs.

There were several individuals who worked on this throughout the process, they include Albert Cross and Jerry Hill who spearheaded the efforts.

Once the announcement was made in January 2020 that NLCS was closing the school and going to sell the building, community members went to work to obtain and preserve the school as an educational facility.

According to Bob Phillps “In March 2020, the group of community members went into action contacting other communities who went through the same thing. The group visited other schools in those areas, and charter schools that faced the same thing Springville was facing. They sought advice on how to go about acquiring the school, the application for the charter school was over 200 pages long.”

“Because of COVID-19 the State of Indiana closed that portion of their operations, and the staff was working from home, and slowed the process down for nearly a year. We set out to get a charter school in western Lawrence County, Lawrence County Independent Schools just did not end up in Springville where we wanted it,” Phillips continued.

However, Perry Township Trustee Bob Phillps stated they are 100 percent behind LCIS and added we are not in competition with them.

” We hope they sincerely succeed in every way,” said Phillps.

Throughout the last 16 months, the group encountered disappointments, but there were still uplifting moments throughout the process according to Phillips.

“We were determined from January 6, 2020, when North Lawrence made the announcement that they were going to close it and sell it I told my wife that very day, over my dead body, and I was not the only one in the community who felt that way, and they actually fired up several in our community to see that never was going to happen, and we are still that determined,” he added.

However, Phillps pointed out that it was not against the North Lawrence Community Schools or education, we wanted the building to maintain the heartbeat of the community not as a profitable business to change the community.

The vision for Springville Elementary School is shared by several people, which is not a one-person idea but as a community coming together for a common goal.

Bob Phillps, Perry Township Trustee was the representative that legally requested and reclaimed the Springville Elementary. However, the efforts of the community working together as a group were apparent Tuesday night.

“I told Jerry Hill, Monday evening, this has been a long battle. Albert and you have spent countless hours, and sleepless nights and I salute their efforts,” said Phillps.

“This is a hard-working community and the potential we have for our community is endless. We want to make this a place for the whole community to be able to use,” said Phillips.

The SCA has enough funding to keep the building operations; for a year and beyond without any revenue coming in at this time.

All responsibilities for the operation of Springville Elementary School have been placed under the control of the SCA.

The Springville Festival has not been held for the last couple of years, but plans are being made for next year to celebrate the recent successes of the community. Details have not yet been released at this time.