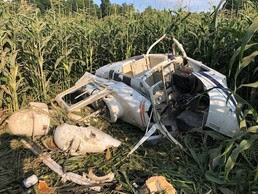 CORYDON – The Indiana State Police in Sellersburg is assisting in the investigation of a helicopter crash that occurred Wednesday afternoon in rural Harrison County.

When officers arrived, they found the wreckage of a Bell 206 helicopter in a cornfield a short distance off the roadway and near a rural residence.

The preliminary investigation reveals that the helicopter is owned and operated by Southmark Aviation in Hattiesburg, Mississippi. The helicopter was being used as a crop duster and accidentally struck a power line running across the cornfield where the helicopter was dusting the crops.

The Federal Aviation Administration (FAA) has been contacted and will be conducting a joint investigation with the National Transportation Safety Administration Board (NTSB).

This crash is still under investigation. ISP conducted the preliminary investigation and is maintaining scene security until the arrival of federal investigators.