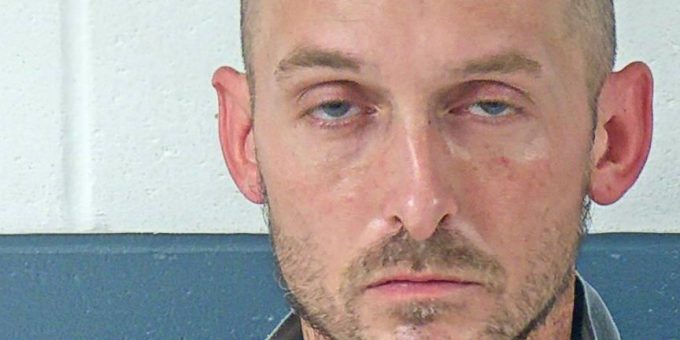 BEDFORD – A Bedford man was arrested after Bedford Police officers were called to the 420 block of J Street after a report of a domestic dispute.

According to a probable cause affidavit when police arrived they spoke to a woman who was in an altercation with her ex, 39-year-old Ryan Hensley. She told police Hensley was angry and was punching the driver’s window of her vehicle.

The woman told police she has custody of their son and was there to pick him up.

Police found Hensley on the front porch. He was verbally abusive and yelling at officers. Hensley refused to obey police orders to stop yelling.

Hensley then began to walk away from the officers, entered the residence and attempted to shut and lock the door to his home.

An officer ordered Hensley to stop and drew his weapon when he witnessed Hensely attempt to pull something from his waistband.

Hensley then ran to the back of the house and “kept poking his head around the corner, pointing his hand out in front of him as if he had a firearm”.

Officers surrounded the home and removed two other individuals from the home to a safe location.

Officers continued to give Hensley verbal commands to surrender and he refused.

Officers breached the front door, giving verbal commands to Hensley to come out with his hands up or he was going to get bit by a police dog.

After several verbal commands, Hensley came out with his hands over his head.

Officers forcibly took Hensley to the ground and was able to place him in handcuffs, even though Hensley resisted.

While being transported to jail, Hensley confessed he was carrying a knife and was attempting to get it out of his waistband. During a search of his person at the time of his arrest, no knife was located.

Hensley was arrested on charges of interfering with child custody, resisting arrest by force, and disorderly conduct.