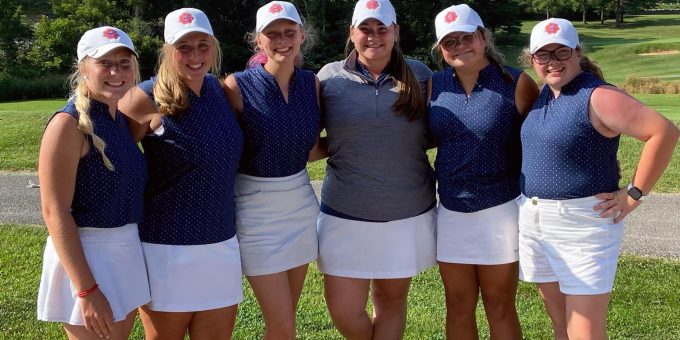 BNL had to battle through a grueling 6 1/2-hour round and posted three scores in the 90s. Chloe McFaddin set the pace with 94, Kenley Craig carded 97, and freshman Ellie Horton recorded the team’s lone birdie while firing her 97. Daphney Sproles completed the team scoring with 104.

“For several of them, this was really their first take of a high school tournament, and it was definitely a long day,” BNL coach Kori Johnston said. “We played with some players that were brand new to golf, so props to them for holding strong that long and helping out the new girls as much as they could while playing their own game.

“From one to five, their scores should be about 10 strokes less, and they all agreed. They learned the greens at the Country Club are very fast, but a lot of it was just settling in, what it feels like to be in a tournament and shaking off the first-round nerves. Their mental attitudes, with such a long round, it was nice to see them hang in there.”

Westfield sophomore Samantha Brown was the medalist with a sizzling 67, while Evansville North senior Faith Johnson carded a 70. Madison’s Keara Eder was third in the individual medalist race with 71.

The Stars will return to action on Saturday in the Washington Invitational at Country Oaks.