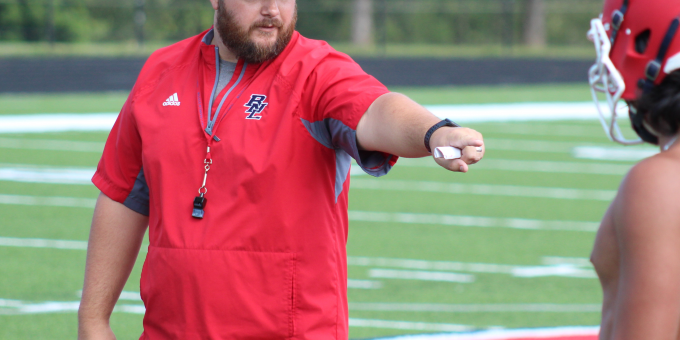 The first rule for Bedford North Lawrence’s new playing surface: don’t forget to wear a shirt. Bare skin, shining with sweat, will soon be caked by those tiny rubber pellets that comprise that sparkling turf. Ewwww.

The second rule: wear comfortable shoes that won’t melt. The turf radiates heat, so be prepared. Don’t stand in one spot for too long. Ouch. Third rule: shake out the shoes. Pellets, like beach sand, will find every crack and crevice. They’ll end up in the car carpet, in the house, in the laundry. Ugh.

The Stars started breaking in the new turf with the official start of practice sessions for the 2021 campaign on Monday afternoon, and nobody stood in one spot for too long. There’s a lot of work to do during the next 18 days leading to the season opener, and BNL now has a lot of room to accomplish that. Idle hands are the devil’s workshop, after all.

“I thought the effort, the energy was really good,” Barker said. “I’m sure the first day on the field, the first day of the season had something to do with that excitement. But the big thing for me was getting a lot done, moving around, being organized and efficient. We did a good job of that and had a lot of guys getting reps. It was a good day.”

BNL will take incremental steps toward the debut at Martinsville on Aug. 20. This week, it’s helmets and shoulder pads on Tuesday and Wednesday, full battle gear on Thursday. Next week it’s the IHSAA controlled scrimmage with county rival Mitchell, the final rehearsal for the clash with the Artesians. Over the next 18 days, there are a lot of starting positions to be determined.

“We have guys we want to see in game action, so nothing will be solidified until after the scrimmage. One of our goals is to not be the same team in Week 1 that we will be at the end of the year. So if that’s adding new plays, adding blitzes or moving guys around, we have guys that are versatile and can play more than one position. So each week we’ll look a little different.”

This week, BNL will look like a work in progress. That’s expected with the adjustment to a new head coach, even a former assistant with Barker’s familiarity and a staff that comes back intact. Everyone does things a little differently, the pace of practice has changed. The electricity is flowing through the program.

“I’ve never seen a group of kids this excited to play football,” senior lineman and newly-minted team captain Jake Terrell said. “It’s amazing. I’m excited to be out here and going hard. I have to step up and be a leader, show everyone else the example and hold people accountable.”

When the dust settles, when the pellets start to soften, BNL will find its groove. And it will be a more mundane existence with an emphasis on the tedious rather than the terrific. Do things correctly, over and over, until perfected.

“We will refocus on fundamentals, playbook-type stuff, then work toward being ready for full contact,” Barker said. “Make sure we’re good tacklers, making sure we’re attacking blocks and defeating blocks. So when we get the gear on, we can go into more intensity, more physicality.”

BNL will host Mitchell in the scrimmage on Aug. 13.