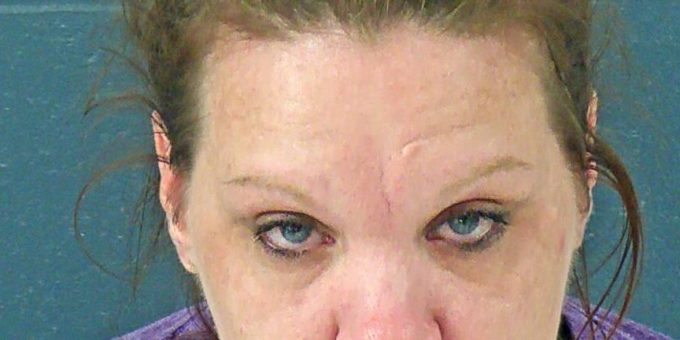 BEDFORD – A Bedford woman was arrested after Bedford Police were called to Crowder’s Pharmacy after a report of a person passed out in an SUV in the parking lot.

When officers arrived they made contact with a female employee and 38-year-old Tricia Frost who was sitting behind the wheel of a silver Toyota Highlander.

Frost stepped out of the vehicle to speak with an IU Health Hospital Ambulance crew who were called to the scene.

Police then learned Frost was wanted on a warrant and had a suspended driver’s license.

In the vehicle, officers found a glass smoking device with meth residue and a baggie containing crystal meth. They also found pills to include Hydrocodone bitartrate, which Frost did not have a prescription for.

Frost was also arrested on a warrant stemming from an incident on April 23. Frost was stopped by an Indiana State Police trooper when he noticed her vehicle parked in the middle of Indiana Creek Road, north of State Road 158, and stopped to see if she needed assistance.

The trooper, who was off duty, could not find anyone in the vehicle.

He then noticed Frost, inside the woods walking up a steep embankment on the east side of the roadway.

The woman was carrying a stick and yelled “I am here”. She had a stick in her left hand and a vehicle ice scraper in her right hand.

Frost told the trooper,  “I figured it was just a matter of time.”

She told the trooper she was driving home from Springville and decided to stop and mushroom hunt.

The female did not have permission to be on the property.

The trooper then learned Frost was driving on a suspended driver’s license with a prior conviction.

The trooper asked for consent to search her vehicle. Inside the trooper found, in the center console, a glass smoking pipe with meth residue in it.

Frost denied that the pipe belonged to her.

The trooper found another glass pipe in her purse that also contained meth residue and a baggie that contained crystal meth.

Frost was released from the scene and her husband picked her up.

The information was forwarded to the Lawrence County Prosecutor’s Office and a warrant was issued for her arrest on charges of possession of meth and drug paraphernalia and driving while her driver’s license was suspended.