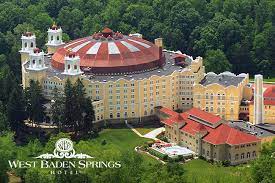 FRENCH LICK – The Wild Party slot machine produced a wild payout this past weekend for a guest who claimed the largest jackpot in French Lick Casino history.

The winning jackpot Sunday night was worth $690,623 to the lucky winner, a resident of southern Indiana. It’s the largest payout by far in French Lick Casino’s 16-year history, more than doubling the previous record jackpot of $265,880.20 in 2013.

That rich of a jackpot is a rarity in Indiana — especially so at a privately owned casino, explained Jeff Whereatt, the Director of Slots at French Lick Casino.

“It’s a very big deal. Around here, you don’t see a lot of local jackpots or progressives this high,” he said. “In places like Las Vegas where they can link multiple properties together you see jackpots get high, but in Indiana, you don’t see it often.”

The winner, a French Lick Rewards cardholder, earned a progressive jackpot that had been growing and growing since it last hit in June of 2019. Information about the winner is being limited for privacy.

As word got out about the record jackpot, Wild Party became a popular attraction for guests trying to hit it big. Over the past three months, Wild Party games occupied four of the top 10 positions among the casino’s most popular slots, joining traditional top favorites like Wheel of Fortune and Dragon Link. Previously, the highest Wild Party jackpot had been $256,000.

As fun as the buzz was about Wild Party’s growing jackpot, Whereatt said it was also a good feeling to finally have a winner claim a life-changing sum of money. And even though the mega jackpot has been claimed, there’s still an opportunity to win big on the Wild Party game as the starting jackpot resets at $136,000.

“It’s nice to see the jackpot hit and get going again — and we’ll see what it gets up to this next time,” Whereatt said. “The Wild Party games are not going anywhere, so we’re going to keep them on the casino floor for as long as people enjoy playing them.”