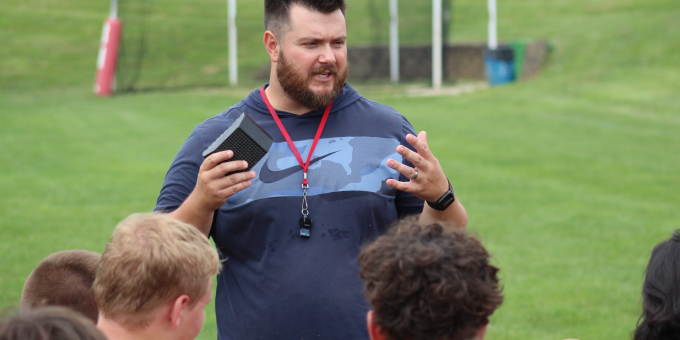 BEDFORD – The finishing touches are under way for the final phase of the $2.6 million transformation of three major facilities to turf fields, and the biggest – the crown jewel of the trio – was saved for last. Bedford North Lawrence’s upgrade of Stars Stadium to a state-of-the-art football facility is a few days away from completion.

At the same time, rather appropriately, the finishing touches are being applied to the new-look team that will step foot on that sparkling, rubberized grassland. The Stars are in transition mode with new head coach Derrick Barker, the former defensive coordinator who took over the program in March and has spent the last four months preparing for the unveiling.

As work wraps up on the turf, Barker and his staff have wrapped up the off-season workouts and scrimmages. Next week is a “dead” week before the 2021 season comes to life with the start of official practice sessions on Aug. 2. After that, the countdown quickens to the home scrimmage with Mitchell (Aug. 13), the season opener at Martinsville (Aug. 20) and the home opener with Jeffersonville to christen the new field (Sept. 3).

That time span will pass as quickly as the work on the field, which didn’t begin until the end of the track season in May. Two months later, BNL football has joined the rest of the Hoosier Hills Conference and most of the upper-class programs in the state (and the 21st century) with its magnificent new amenity.

“It’s huge,” said BNL senior and team captain Grant Todd. “Not just for us but for the younger guys. We were always grateful for having a field, but this has been tremendous. It’s a huge improvement, just for the younger kids to see what we’ve seen from other schools. There’s a lot of excitement and good things coming from it.”

The excitement level has started to escalate, a sense of pride can be felt and heard among the coaching staff and the returning athletes.

“We’re excited about it,” Barker said. “We go out and look at it about every day. Honestly, the biggest things we’re excited about it are practicing on it, being able to have the yard lines, the hash marks, the full 53 yards wide, over 100 yards long, to get more work going on and split kids up. That will help us tremendously.”

If any program needed a shot of enthusiasm, a jolt of emotion, it’s BNL. Last season ended with such disappointment when the Stars were forced to withdraw from the IHSAA state tournament because of a COVID-19 outbreak among the program. After avoiding the dreaded virus during the entire preseason and the 2-7 campaign, BNL’s season ended with the worst possible letdown and a five-game losing streak. Then the coaching change came. BNL had to flatten the curve of failing expectations in a hurry.

“It really hurt, missing the tournament,” team captain and lineman Isaac Jackson said. “But taking that feeling, we’re bringing that into this year. I think they will propel us into wanting to do our best. We see this as a season to turn the program around, getting things back on track. We’re not only worried about this year, we’re focused on building for the years to come.”

It was the craziest year ever, when news from a doctor visit was bigger than the outcomes on the field. BNL was one of 152 teams (out of 318 across the state) to complete the regular season, then become one of 7 to forfeit its first playoff game when the virus resurfaced.

“The seniors (last year) are who you feel the worst for, but everyone suffered,” Barker said. “It definitely hurt. Kids were exited, New Albany (BNL’s first-round opponent in the 2020 sectional) was a team we hadn’t seen, so it was a difficult experience. It has fueled some of the fire in them, to get back out here. Nothing great came from the whole COVID experience, but if anything it taught them it can be taken away in a day. You have to work hard.”

Barker and the Stars vowed to renew their work ethic during the spring and summer. They have started to see some dividends from their investments, with success in the 11-on-11 and 7-on-7 scrimmages against Brownstown, Salem, Charlestown, West Washington and Franklin. Those outcomes are meaningless in a lot of ways, but they had extra weight for a team that needed something to break its way.

“We needed to strike early, have some success, get the kids believing in what we were teaching, to see the effort in the winter, in the weight room and running, is paying off,” Barker said. “So it was huge for us. We obviously won’t be a 7-on-7 team that throws the ball a lot, we’re going to live to run the ball and stop the run, play more physical, but it’s good to have some success.

“They’re working really hard, the numbers have been up, the effort in the weight room picked up a lot. We’re starting to see gains in size and speed. That’s the biggest things we’ve focused on. The kids aren’t timid, they’re not afraid to get in there and try to win a spot.”

“It was a big factor, being able to go out there and compete,” Jackson said. “We’re showing the new guys what we’re trying to rebuild, what we’re reshaping the program into. I think we’ll carry that into the season.”

BNL finished with only eight seniors on the roster last season. In stark contrast, the Stars had as many as five freshmen on the field, in part because of injuries. They lost four starters for two weeks with precautionary quarantines. They won only two games, the lowest number since 2013.

There were some bright moments. Quarterback Brye Lewis was an electric highlight generator, leading the Stars in rushing (865 yards, 11 touchdowns) while completing 43 of 95 passes for 573 yards (7 interceptions, 5 TDs). Zane Anderson headlined a solid running attack in the triple-option offense. The Stars were impressive during a 35-6 win at Jennings County and a 41-28 triumph at Madison midway through the season.

The biggest change on the horizon? Culture. Todd emphasized the leadership aspect of his captaincy, the ability to guide the younger players and listen to their concerns, to offer solid advice, to showcase discipline. He sensed that had been missing. He and Jackson want to be role models, someone to confide in and lean on.

“It’s a big honor,” Jackson said. “I’m not only worried about myself, it’s a team sport. I’m here to help everyone, give them the drive to compete and win. I’m here for the team success.”

Will the new field contribute to that success? It won’t alter any strategy. And the good old days of playing in a mud pit on a rainy Friday night are over. In fact, BNL will play the entire 2021 season on turf and wouldn’t see a real grass field (possibly at Castle, one of the last old-school holdouts in Class 5A) until at least the regional.

”It’s kind of sad, in a way,” Barker said, turning the page in more ways than one. “But in the past, one good rainy night and the field was torn up the rest of the year.

“It’s a whole new ballgame. As a new head coach, there are areas to focus on that I hadn’t before – the logistics, the paperwork, the guidelines, keeping parents in the loop. At the same time, it’s been fun. It’s been cool to see the kids buy in and get it rolling.”