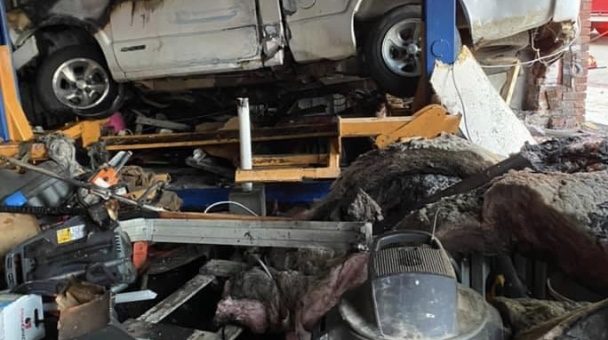 BEDFORD – A pick-up truck traveling at a high rate of speed slammed through the Citiloo Power building located at 5th and Lincoln at 7:00 p.m. Sunday night.

The fire department sits at that intersection and was able to respond quickly to the scene. The vehicle caught fire, and firefighters immediately began search and rescue efforts to make sure no one was in the vehicle or the building at the time of the fire.

“There was no one determined to be in the building or vehicle and firefighters began firefighting efforts,” said Bedford Fire Chief John Hughes of the Bedford Fire Department.

The vehicle was headed north on Lincoln Avenue, the female driver hitting the building went through the wall of the building and onto a mower lift inside the shop. The driver barely missed the mower lift pole.

The driver had a head injury, but according to emergency officials, she was not transported to the hospital.

According to Chief Hughes, Indiana State Road 58 near Lincoln Avenue had to be shut down as 2-inch hose lines were deployed along the highway to aid in fighting the fire.

There was extensive damage to the building not only from the accident but also from fire.

“The fire made its way into the ceilings and through the roof of the building,” said Chief Hughes.

Weaver’s wrecker service used two wreckers to remove the vehicle from the building. Once it was removed, firefighters went to work making sure the fire did not extend in a nearby wall.

“We want to thank all the agencies that helped us with this incident. We all worked together to get this emergency under control which included. Bedford Police, Bedford Fire, Indiana State Police, IU Health Ambulance, Duke Energy, and Weaver’s Wrecker service,” said Chief Hughes.

Firefighters were on scene until about 10:15 p.m. Sunday night.