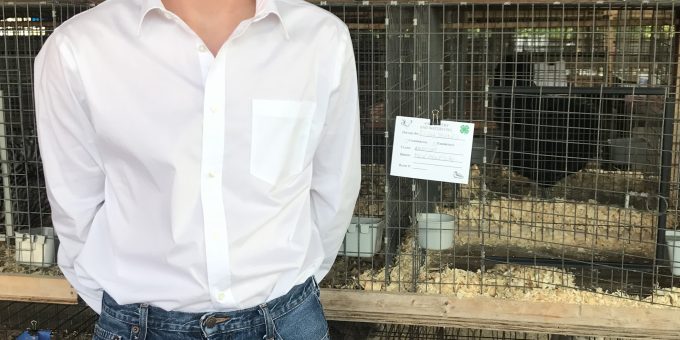 LAWRENCE CO. – Many do not seek to be in the spotlight, being noticed, or seek after accolades from others. However, for some, their hard work, leadership qualities, and attitude can not go unnoticed.

That is the case for Jacob Wade who’s time was spent in the Poultry section of the Lawrence County 4-H Fair.

Jacob Wade, a 2021 graduate of Bedford-North Lawrence High School has been showing in 4-H over the last nine years.

Wade has only shown Broilers and it is his last year in 4-H as he moves on to his career.

Jacob has served as the Vice-President of the Poultry Club.

Jacob is a prime example of one that demonstrates how involvement in the 4-H organization can help youth transform into a leader.

Jacobs’ leadership qualities were demonstrated when he partnered with the secretary of the Poultry Club to facilitate a meeting on short notice. “In a matter of fifteen minutes, Jacob and my son who serves as Secretary put together the whole entire meeting. A bunch of new families attended that meeting and came to me afterward stating that was absolutely the best meeting they attended and learned so much, he just has excellent leadership skills,” stated Jenkins.

“He went from such a shy kid to a man, and has meant so much to me,” Jenkins concluded.

Wade says he has learned a lot about responsibility but most of all he’s learned how to foster teamwork.

“I have learned a lot of new things and met a lot new people every year. It has been a wonderful experience,” said Wade.

Wade completed a year of machining at the North Lawrence Career Center and has recently landed a job in the machining field of trades. He will have an opportunity to attend a trade school continuing his education of the field.

4-H youth have migrated on into many career fields not only in agriculture but into other trades, and occupations. 4-H has helped mold the foundation for of many of our youth that enables them to become strong leaders in their field of choice and our community.