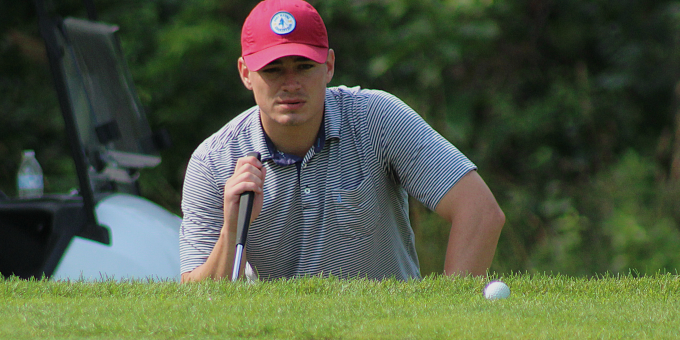 BEDFORD – Golf’s essence, its heartbeat and ethos, is the inherent drama, the magnitude of the moment measured against a man’s ability to rise to the occasion, to conquer fear and cowardice with the best, bravest shot.

Trey Turner, whose resting pulse rate almost doesn’t register for all the ice water flowing through his system, etched his name in history on Sunday afternoon, converting a clutch birdie on the final hole to win his second Bedford Men’s City Tournament championship. He broke character with a fist pump – a rare show of emotion for the steely-eyed victor – when that 30-foot putt from the fringe borrowed into the cup.

Capping the most phenomenal finish since Dennis Gratzer’s miracle chip-in birdie from a clover patch next to the old 18th green in 1989, Turner completed 72 holes at 6-under 282 with a final-day 71 on the fourth tour of Otis Park. He posted a three-shot win over dogged runner-up Jalen Hodges, who scrambled back from certain doom twice and went to the last hole with a share of the lead.

Turner plunged a dagger in the tournament with his electric birdie, while Hodges couldn’t rescue his tee shot from a greenside bunker and ultimately walked away with a dejecting double bogey. That was a deceiving finish for a tense, terrific duel on the back nine. Hodges finished with a even-par 72 and four-day total of 285, although that hardly tells the story of a final round with more twists and turns than a M.Knight Shyamalan film.

After the seventh hole, Turner owned a commanding six-stroke lead. After the 15th hole, his margin was two shots and he was just a short, mistake-free jaunt down the hill to the clubhouse and a celebration. Twice, Hodges defied his obituary among the walking dead with a sensational resurrection. That’s why golf is such a grand game, for moments such as these.

When the smoke cleared from the 18th-hole fireworks, Turner chiseled his name in limestone among the multiple City champions, adding to his 2017 victory. This one was definitely the more stressful and difficult of the bookend pair.

“It’s exciting,” Turner said. “God has given me the ability to play this game. It has given me so many amazing opportunities and experiences, friendships that will last forever. This is deinfiely up there in the tournaments I’ve won, for sure.”

The day started with Turner in front by two, but he quickly expanded that margin with a fabulous run on the front nine. As Hodges struggled with tee shots and scrambled, Turner exploded by going 4-under during a sizzling three-hole stretch. The burn started on 4 with a beautiful wedge to five feet for birdie, and he carded a gorgeous eagle on the par-5 fifth hole. He muscled a drive within 180 yards, zapped an iron approach to the right fringe and rolled home the 15-footer. When he got up-and-down from the back of the sixth green for another birdie, Turner was 8-under for the tournament and threatening to run away.

No fist pump for the eagle, not even a wry smile. Maybe a flash of satisfaction in those dark shark eyes – sparking a reference to a Captain Quint quote from Jaws: “The thing about a shark, it’s got lifeless eyes, black eyes, like a doll’s eyes. When it comes at you it doesn’t seem to be livin’. . .” – hidden under that golf cap that was tugged tighter than a snare drum. He could smell blood in the water.

“I was a little squirrelly on the front,” Hodges said as he drifted further behind. “I didn’t birdie the par-fives, it was kind of a scramble fest. But I knew if I kept it together, something could happen.”

Turner made a messy bogey on the 8th, clunking a wedge short from 100 yards, and then lightning struck on the 9th fairway. Hodges rifled his tee shot to the 100-yard stake, and he attacked with a wedge that landed 8 feet from the flag, took one bounce into the slope cutting through the midst of that green, and rolled back into the cup for an eagle. Hodges dropped his club in jubilation with his own mic-drop moment.

“It was literally the exact shot I was trying to play,” Hodges said. “I knew, if it landed anywhere, it would take a hop and it was always going to come off that hill. It was awesome.”

Turner, shocked by that unexpected event, made another unforced bogey there and sailed his tee shot long over the green on the 10th. When Hodges coldly buried a 25-footer for birdie, he had erased the six-shot deficit in three holes and pulled even at 5-under. Turner’s lead had vanished like smoke in the wind.

“I definitely thought I was losing it,” Turner said. “Seeing Jalen hole it on 9 was a bit of a shock. It was a big jump, so the most stressful thing was just resetting myself. I wanted to stop making bogeys, I didn’t want to go back toward him. I was still trying to be aggressive.”

So Turner didn’t make another bogey, saving a couple of teeth-clinched pars on 12 (from the front slope), 15 (from the front fringe) and 16 (from long over the back). Hodges missed a couple of chances to apply more pressure, lipping out a short birdie putt on 11 to stop his momentum, failing to get up-and-down from below the 12th and three-putting from the edge on the 13th green.

Once again, Hodges, with his emotions on display and he lived and died with each turn of fortune, roared back. He banged home two clutch putts, a 3-footer after a snappy wedge on 16th, and a testy 8-footer that earned his own fist pump on 17. Again, he was deadlocked with a title within his grasp.

On the 18th tee, 180 yards from home, Hodges chose an aggressive line toward the flag tucked on the right edge of the putting surface. His shot fought the breeze but slid off into the right bunker. Turner, sensing his opening, chose the more conservative route toward the middle of the green and came up just short but safe when the ball spun back into the fringe. That set the stage for the memorable conclusion.

“I fired on 18,” Hodge said. “I was feeling it. I felt I hit it well, I thought it was coming in, but the wind held it just off to the right. And when Trey made that putt, that was an awesome way to go out. I can’t complain. I was right there. There was some bad stuff but a lot of good stuff. I could have made a few more putts, I left a few in the jaws. But that’s golf.”

“Jalen didn’t go away, he kept coming back,” Turner said. “Seeing him go right, it looked good off the face when he hit it but it went in the bunker, I knew I just needed to get it on the green. I read it well, I knew exactly what that putt was going to do.”

And his reaction? Priceless.

“It was more relief, and excitement too,” Turner said. “That was a stressful round. It was good to knock that one down.”

Aaron Harrell, the three-time defending champion, lurked near the leaders all day until a double bogey on the 14th hole. He birdied the second, fifth and 17th holes and finished with a 1-over 73 for an even-par 288 total in third place.