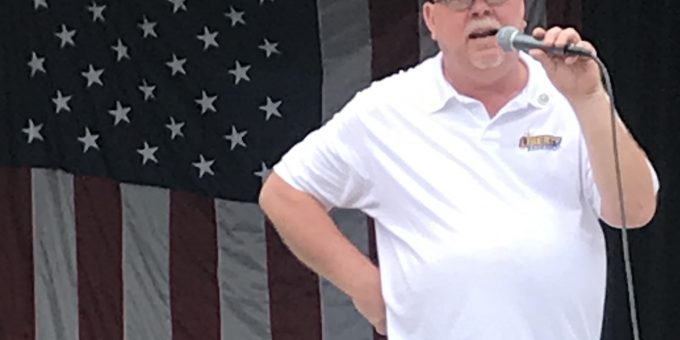 LAWRENCE CO. – Harp Commons was designed for our community to gather to socialize, meet new people, eat, celebrate and perhaps on occasion to host events such as a political debate.

Saturday the Libertarian Party of Lawrence County hosted the ” Liberty Bash” . The Party Chairman of Indiana, Evan McMahon, and 2020 Indiana Governor Candidate Donald Rainwater were among those who attended Saturday’s event.

In the 2020 Indiana Governor’s Race locally Rainwater received over 3,881 votes over Democratic Candidate Woodrow Myers who garnered 3616 votes. In Indiana, over 350,000 votes were cast for Rainwater.

Tonya Millis 2020, 9th Congressional candidate organized Lawrence County’s first-party meeting earlier this year at a local restaurant not expecting a very big response other than one or two people.

However, at the first meeting, there were three full tables of attendees. Lawrence County has since been registered in the State of Indiana.

The Libertarian Party believes the interest in the party continues to grow as the COVID-19 pandemic highlighted the fears of a government that prevents citizens from making choices for themselves and their children.

The message of the Libertarian Party includes being able to make choices for yourself, people in your community to have rights, and the responsibility of choosing what is best for their own lives.

Topics Saturday included the constitutional right to carry, which according to those who spoke on Saturday, said Indiana’s Republican majority has failed to protect the Second Amendment Right. Instead of granting the right to carry, they instead require you to ask permission without a fee.

Members of the Libertarian Party stated in the last legislative session, over 200 new laws were passed with 40 new taxes passed on to Hoosier families. They believe that in one of the most difficult times for both businesses and residents and with a surplus of revenue generated by previous taxes the state added more tax burdens.

Rainwater continued to state that the Republican party who say they are for less government continues to pass more laws, and the Democrat party is a party of big government.

“We pay rent twice a year, to our state government in property taxes,” said Donald Rainwater.

It was stated by Rainwater that local ordinances, are passed to regulate the height of your fence or grass, and if you don’t mow it they will fine you and can even take you to court if you continue to refuse to mow your grass.

At the state level, over 50 percent of the Indiana Budget goes to the public school system but rather than going to the education of children it has been placed in buildings, projects, and administration, says Rainwater.

Rainwater continued to state during his speech that the education system continues to fail students with many not graduating high school.

Those in the party also cautioned that with rights comes responsibility with those same rights. Along with the liberty to have freedom as long as it does not harm someone one else also comes with responsibility

“We have a’ Statue of Liberty’ on the east coast, but we need ‘Statue of Responsibility on the west coast,” said Donald Rainwater.

Rainwater concluded with the bold statement that the empty promises of both parties have left the American people disillusioned with fewer liberties, and many freedoms once enjoyed eroding away.

Those in attendance were urged to see what the Libertarian Party has to offer. A quiz is available to see where your beliefs lie in deciding whether your political leanings are towards the party.

Darin Kinser the party chairman encourages those who want to learn further details regarding the Libertarian Party to visit them on their Facebook page.