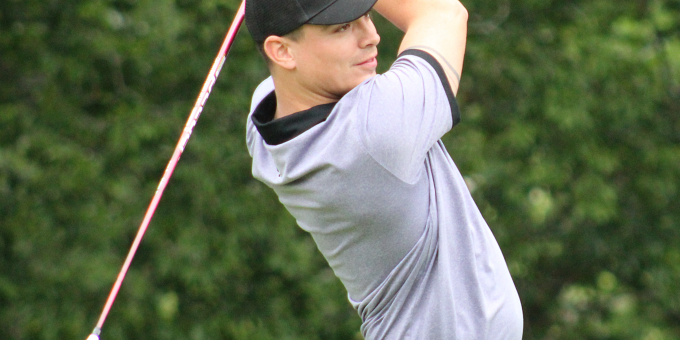 BEDFORD – Trey Turner steers clear of the first challenge, the opening tee shot, at Otis Park. Nobody wants to stare in embarrassment and red-faced disbelief when that round-starting drive sails left over the boundary wall. There’s plenty of acreage the opposite direction.

After a conservative start, after a first-hole bogey, Turner took dead aim at the rest of the course. And he hit the bull’s-eye, firing a terrific 4-under 68 while charging to the outright lead after the second round of the Bedford Men’s City Tournament on Sunday morning.

Turner, content to settle for the opening bogey, didn’t card another one during a mistake-free cruise through the next 17 holes, and he was rewarded with a four-stroke lead at the halfway point of the 72-hole tournament. Turner, one of the co-leaders after the first round, finished 36 holes at 7-under 137 and will chase his second City championship from the frontrunner’s viewpoint next weekend.

Ethan Stanley, another of the trio that started with 3-under 69s on Saturday, fired an even-par 72 and settled into second place at 3-under 141, while three-time defending champion Aaron Harrell also posted 72 and completed the first half of the event at 1-under 143. Jalen Hodges carded a 2-under 70 to join Harrell at 143.

Turner, the 2017 champion, made up for the single slippage in spectacular fashion, recording three straight birdies on the front nine, then playing the ticklish back nine in 2-under 33. Once again, he proved the cliche: it’s not how you start, it’s how you finish. He finished alone atop the leaderboard, when many others would see the first-hole bogey as an omen of looming disaster.

“My goal getting off No.1 is not hitting it over the road,” he explained. “So I’m fine with going right in the trees and trying to scramble for a par. I wasn’t upset with the bogey, I just knew I had to get some stokes back. Going into the round, getting through the fourth hole at even or 1-over is the goal, because the scoring holes come up after that.”

Turner’s strategy worked perfectly. He slammed a wedge to 12 feet for birdie on the fourth hole, then tamed the back-to-back par-5s (5 and 6) and roared into red numbers. He made the turn to Turnertown (the new name for the back nine, with the way he has performed back there) and carded two more birdies (holes 13 and 16) while pulling away to a comfortable margin.

The back nine at Otis requires a shift in mindset and execution. It’s more target practice rather than wide-open, blast-and-recover golf, and perhaps that’s why Turner has carded five birdies in two days of the hilly test after the clubhouse turn.

“If you get wayward off the tee, you can shoot some high numbers on the back,” Turner said. “If you make the right club selection off the tee and keep it between the tree lines, you can shoot some good scores. There aren’t a lot of long holes. It’s almost a completely separate course in the way it’s laid out, and the greens are different. It’s an adjustment, which is why people struggle with it.

“I kept the ball in the fairway for the most part. The 14th and 15th can get tricky if you don’t hit the fairway, but I hit good tee shots and made two good pars (in the infamous part of the course known as Death Valley). So I’m happy with 2-under on the back.”

Stanley claimed second-place status once again (he’s finished there the last two years) with a scorecard that reflects his day. A few birdies, a few bogeys, nothing to crow much about, nothing to curse. He carded three birdies (holes 2, 6 and 11) but three-putted twice. His putter took the brunt of any blame.

“A little bit of mental slips,” he said. “I thought I was hitting it better than I was yesterday, so it was kind of odd to end up with the score I did. I wasn’t taking advantage, when I had birdie looks I didn’t capitalize as well as I did yesterday. I didn’t see as many go in.”

Harrell had a similar round with three birdies (6, 13 and 17) and three bogeys (4, 8 and 15) that doused any momentum. But he’s still in contention for a victory that would propel him even further up the list of City legends.

Hodges birdied the 7th and 9th holes while carding a 1-under 36 on the front, and he followed with a flawless back nine, adding a birdie on the par-5 17th to cap his 34 on the second side.

The other first-round challengers fell back with rounds over par as Koby Robb (76), Daylen Tidd (75) and Zach Terrell (75) remained within striking range.

“There’s plenty of time left,” Stanley said. “You can birdie every hole out here. You know the birdies are out there and I can go low enough, it’s just doing it. So I’m excited. It will be a fun weekend and I’m looking forward to the challenge, to see if I can fight back. You have to stay in the present, not worry about what everyone else is doing, focus on your own game. Take your chances when you get them.”

Turner will have the luxury, or the perhaps the mental burden, of resting on the lead.

“It’s definitely good to get a little bit of space,” he said. “It’s good to get some separation. This is a little different four-day tournament with the week in between the second two rounds. So having that assurance of a four-stroke lead, when you don’t play for five days, it’s nice to have.

”I expect some low scores, people coming out knowing they have to make up some strokes. I just need to play consistent like I have the last two days, no worry about the scoreboard and just play my game.”

The final two rounds are scheduled for July 17-18.