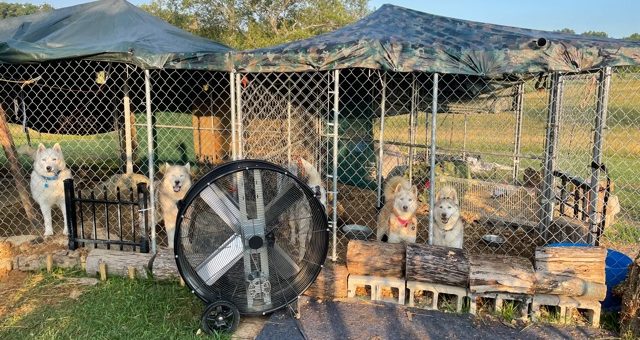 SPRINGVILLE – Due to the death of a pet owner in Mitchell five huskies were left abandoned. The White River Humane Society and Lawrence County Animal Control were able to retrieve the dogs.

At first, the plan was to adopt out the five to separate homes but Robin Compton decided to keep the five together as one big family. The dogs named Alo, Sadie, Yuna, Balto, and Lakota have found their home in Springville, Indiana.

This project has been termed the “Five Alive Husky Rescue”.

This project was a major undertaking for Compton who has already spent approximately $3,000 in making sure the dogs were provided shelter, with a cage, kennel, cooling room, straw, and cedar chips.

Compton will host a bonfire at 110 Knotting Hill Drive in Springville on Saturday, July 17th at 6:00 p.m. Compton will be providing hamburgers and hotdogs for those guests that attend. All provided food and drinks are free to the public, however, Compton is seeking donations to help with the family of dogs care.

Guests will be allowed to visit with the dogs while in their kennels and survey their homeland area to see how well they have been taken care.

Compton would like to assure the public that no one will be pressured to donate at the event, but if anyone would like to contribute, those willing can do so.

Later this year, Compton and the family of five will be camping out for a fundraiser for the White River Humane Society.