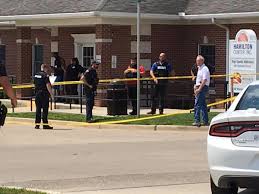 TERRE HAUTE — A Terre Haute Police Department officer was ambushed and fatally shot Wednesday afternoon outside an FBI building in Terre Haute, according to state police and the FBI.

Detective Greg Ferency was a 30 year veteran of the department. He was also a member of an FBI Task Force since 2010.

The suspect was reportedly driving a gold or silver Ford F-150 truck with rear-end damage. The vehicle that matches the description was located parked at Regional Hospital. The FBI says one of its agents then shot and wounded the suspect who fled the scene.

He underwent surgery and is currently in custody and receiving medical treatment.

The FBI released the following statement:

“Today, at approximately 2:15 p.m., FBI Task Force Officer Greg Ferency was ambushed and fatally shot at the FBI Indianapolis Resident Agency in Terre Haute. TFO Ferency was a 30-year veteran of the Terre Haute Police Department and had been a federal task force officer since 2010. We want to extend our deepest sympathy to TFO Ferency’s family, friends, and fellow officers. An FBI agent shot and wounded the suspect who is currently in custody receiving medical attention at a local hospital. The FBI takes all shooting incidents involving our agents or task force members seriously. In accordance with FBI policy, the shooting incident is under investigation by the FBI’s Inspection Division. The review process is thorough and objective and is conducted as expeditiously as possible under the circumstances.”

“The tragic events that unfolded today are senseless. Our heart breaks for Detective Greg Ferency’s family, loved ones, and those who served with him every day protecting the residents of the Wabash Valley. Janet and I are thinking of the Terre Haute Police Department, the community, and Detective Ferency’s family as I know they will be steadfast in honoring his life, service, and dedication to the residents of Vigo County.”