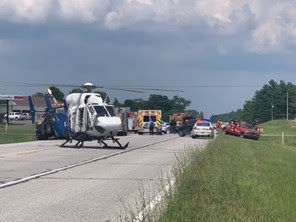 SALEM – Troopers from Indiana State Police Sellersburg post are investigating an injury crash involving a passenger car and a log hauler that sent one driver to University Hospital with serious injuries.

At approximately 3:14 p.m. Wednesday, ISP troopers, along with officers from the Washington County Sheriff’s Department, responded to the intersection of State Road 56 and Old State Road 56, just east of Salem.

When officers and first responders arrived, they found a gray 2006 Pontiac G6 partially pinned underneath the rear of a fully-loaded log trailer. The driver of the Pontiac, 33-year-old Clay Thomas Ingram, of Salem, was trapped inside the vehicle and had to be extricated by emergency crews from the Salem and Gibson Township Fire Departments.

An air ambulance was immediately called to the scene. Ingram was flown to University Hospital in Louisville with serious but non-life-threatening injuries.

The semi-truck with a log trailer was driven by 28-year-old Mark Anthony Hicks, from Pekin. Hicks was not injured in the collision.

After the preliminary investigation, officers believe the semi-truck was traveling east on State Road 56 and slowing to turn north onto Old State Road 56. As the truck slowed for the turn, the Pontiac G6 approached from behind and failed to yield, colliding with the rear of the log trailer.

Neither alcohol nor drugs are believed to be a factor in the crash.