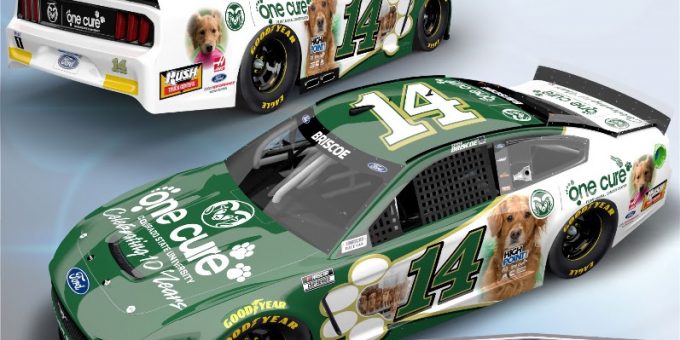 ATLANTA –  Sunday’s race at Atlanta Motor Speedway marks Briscoe’s second Cup Series start at the 1.54-mile oval and the first time he’s revisited a track on the schedule, with the exception of the Pocono Raceway doubleheader.

“I’m pretty excited. We weren’t exactly our best earlier this year at Atlanta,” said Briscoe. “That was probably one of our worst tracks this year. But it’ll be nice to go and know the feel I need the car to have and to know what to expect when I go into turn one on lap one of the race. Having a decent track position to start will also help, so I’m definitely looking forward to having another shot at it. It’s another one of my favorite tracks and I think we’ll be able to have a chance to come out with a good finish.”

When the NASCAR Cup Series visited Atlanta in March, Briscoe started 24th and finished 23rd in just his sixth Cup Series start. Though the team struggled to find the right balance throughout the race, by the time the checkered flag waved, Briscoe felt like the team had improved enough to run up front in this weekend’s return.

One Cure returns to the No. 14 Ford Mustang for its first race of the 2021 season at Atlanta. The One Cure project is led by the Flint Animal Cancer Center at Colorado State University with a mission to find a cancer cure through research benefiting man’s best friend. It is founded on the principle that cancer affects all creatures and that treatment breakthroughs come through collaboration between scientists and doctors working with people and animals.

This approach is known as comparative oncology and it is the guiding concept of One Cure and the Flint Animal Cancer Center. The center works to improve prevention, diagnosis, and treatment of cancer in pets, and teams with the human medical field to translate research findings that will help people with cancer.

The center, located in Colorado State’s James L. Voss Veterinary Teaching Hospital, sees more than 1,500 new animal cancer patients every year, with approximately 130 of them enrolled in carefully monitored clinical trials specific to their cancer type. The canine and feline patients are helping pioneer cancer research, moving cutting-edge treatments out of the laboratory and into clinical practice, ultimately providing hope for the next generation of animal and human cancer patients.

Briscoe has three NASCAR Xfinity Series starts at Atlanta with the best finish of ninth in 2020. The native of Mitchell, Indiana, also made a NASCAR Camping World Truck Series start at the track in 2017, starting fourth and finishing 25th.

Before taking to the track at Atlanta, Briscoe will return to the Truck Series for the third time this year to compete in the No. 04 CircleBDiecast.com Ford F-150 for Roper Racing Friday night at Knoxville (Iowa) Raceway. The former dirt racer has competed in four previous Truck Series races on dirt surfaces, collecting three top-fives and a win at Eldora Speedway in Rossburg, Ohio in 2017. In the Truck Series’ most recent dirt race at Bristol (Tenn.) Motor Speedway, Briscoe started 33rd and finished fifth.

Following his second top-10 finish at Road America, Briscoe gained two spots in the driver championship and is now 23rd. He continues to lead the Rookie of the Year standings by 139 points over Anthony Alfredo and has been the highest finishing rookie contender in 16 races to date.

Briscoe will head to Atlanta with a new car setup.

“We’ll for sure go back with something different. We tried to figure out what worked last time but we’re going to have something different,” said Briscoe. “Truthfully, I’m a dramatically different racecar driver than I was at that point of the year. I feel a lot more confident and know what I need in the car. For us, we should be better going back this time. You never really know until you get there, but I do think it will be a lot easier. Track position at the start is so key in these Cup Series races. You kind of end up running the speed of the cars you’re around, so starting 11th will hopefully help us.”

Briscoe had been doing more racing outside the Cup Series including a few Truck Series races and some dirt racing.

“Doing more racing, I feel like, has made me sharper when I get in the Cup car,” said Briscoe. “Whether it’s running the Sprint car last week in Wisconsin before Road America, or the truck which I’ll run at Knoxville this week, I just think it’s really been helping me stay on my game. They are absolutely different disciplines, but I feel like there’s a lot of crossovers. In Sprint cars, you’re having to work with a lot of tire spin and you have to be able to finesse the car in those situations, which you then deal with on road courses. There are things that I can apply when we go to tracks like Atlanta that are hot and slick when the car is sliding around. You have to be able to control it.”