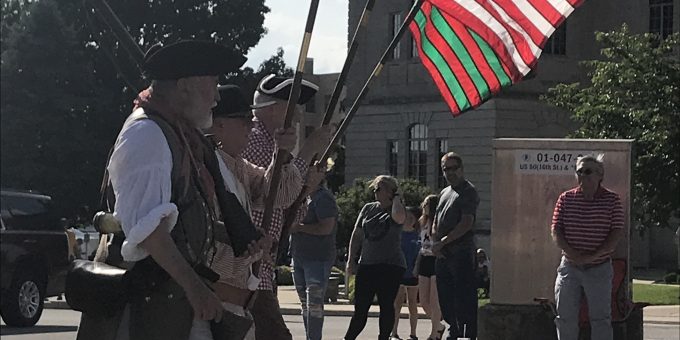 BEDFORD – During this year’s Heritage Festival Parade over 60 units took part, each showing off their patriotic theme.

Jack Voigtschild has served the Lawrence County community in various capacities over the years. Jack is known for having a “servant’s heart”. Donating his time and services with a smile and a pleasant spirit.

Jack has been a Bedford resident most of his life. He graduated from Bedford High School in 1963 and Indiana College of Mortuary Science in 1967. In 1967 Jack served in the United States Army. He served one year in Vietnam, as a medic and received a purple heart. Jack and his wife Sherry have been married 52 years, and have two sons, Brian and his wife Andrea, who have four children, along with Brent and his wife Kathy who have five children.

Bedford Mayor Sam Craig proclaimed June 26, 2021 a “Jack Voigtschild Day.” Mayor Craig stated it is was an honor to bestow on such a person as Jack who has served his community in many ways.

The American Legion Post 33 Honor Guard stood in place of the flag-raising ceremony that was originally planned. The windy conditions Saturday prevented the long tradition of raising the enormous American Flag.

JoAnna Hackney, sang the “National Anthem” celebrating the heritage of a grateful nation with many freedoms and liberties that many throughout the world long for.

The parade brought many smiles and cheers as the units passed through from old vehicles of the past, fire engines, and tractors. Horses decorated in red white and blue finished the parade, a traditional crowd pleaser.

“This is just a great day for a parade,” said Mary Grimes who came to watch the parade with her grandchildren.

We have posted some of the sights and sounds of this year’s parade but not in its entirety.

This years parade winners include the following:

Church: Award of Excellence – The Underground

A complete list of the parade entries for this year’s parade includes: