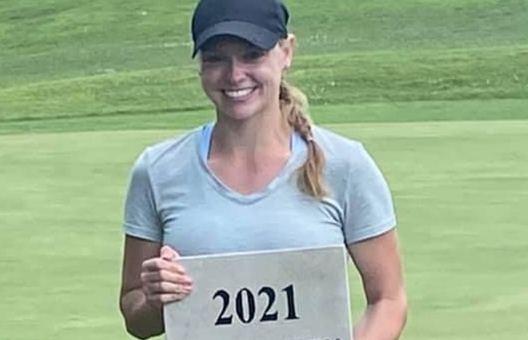 BEDFORD – Defending the crown was a difficult task for former Bedford North Lawrence standout Taylor Norman, who carved out a one-shot victory to take home the limestone trophy in the Bedford Women’s City Tournament at Otis Park on Sunday afternoon.

Norman fired a second-round 76 and posted a 36-hole total of 154, clipping former BNL teammate Olivia Sanders by that deciding stroke. Brooklyn Cromwell was third on the congested leaderboard at 157.

For Norman, the pressure of defending her championship was greater than the challenge of winning the first time. After sleeping on the first-round lead after an opening 78, she came out firing with an eagle on the par-5 fifth hole, overcame some nervous struggles in Death Valley (the infamous 14th and 15th holes on the back nine), and settled with a clutch par from the front bunker on the par-5 17th hole.

”Winning again was tough,” Norman said. “The first time was a goal I wanted to achieve. But the second time was something I really wanted to do. I knew it would be another close round, like it was last year, and I put some pressure on myself. But it all worked out.”

The eagle on the fifth, set up by a brilliant second shot to 6 feet, was an early key to her round, and Norman added two birdies. She stumbled through the Valley, but calmed down with a par on 17 after hitting a bunker shot to safety. She went to the final hole with a two-shot lead and held on.

“I didn’t want to know where I stood,” said Norman, who has transferred to Purdue Fort Wayne to continue her college career. “I would play with numbers in my head if I did, and I was struggling and getting nervous. After hitting the second shot on the bunker on 17, that next shot was pretty big.”

Sanders carded rounds of 79-76, while Cromwell had the round of the weekend with a 1-over 73 on the final day.

In the other City tournaments, BNL’s Chloe McFaddin won the girls Junior, carding 87 in the second round while cruising to a 10-shot win. Colten Girgis fired a two-under 70 en route to the boys Junior title with a sizzling two-round total of 146.