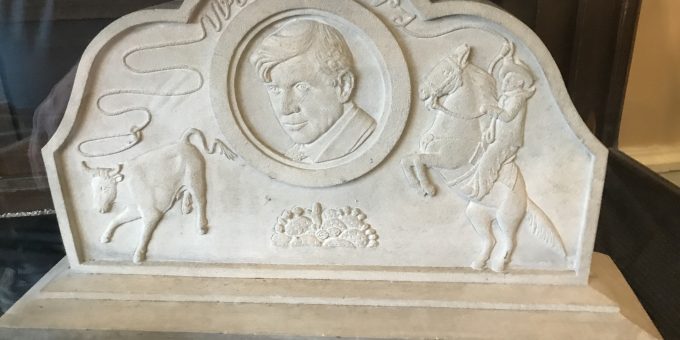 LAWRENCE CO. – Bedford Indiana is known as the Limestone Capital of the World. Limestone from Bedford has been used to build numerous famous buildings in the United States and across the world such as the Empire State Building. It has also been used in sculptures and building facades with famous architectural designs.

Throughout the exhibit, limestone has been transformed by “stonecutters” into beautiful pieces of art .

The Limestone Heritage Festival is in need of stonecutters’ work to display. Any experience level is welcome. It’s free to enter and stonecutters can enter by contacting Terry Kirkman at 812-797-0867.

Spectators can vote for the People’s Choice award and also purchase raffle tickets for a chance to win a limestone carved bird bath.

While enjoying this year’s festival residents are encouraged to take a stroll through the downtown square and see some of these works on the buildings by stonecutters of the past.

There are more than 100 different stonecutters who have lived in Lawrence County and their work is still among us where many can enjoy their beautiful artistry.

Charles Morton Dodd lived in the peak period of the Limestone Industry just before the depression.

The Pioneer, Soldier, and Sailors Monument located on the Lawrence County Square is artwork crated by Charles Morton Dodd.

On Washington Avenue, the Pentzer House, monkeys carved over the front doorway were also carved by Dodd.

Another well-known Stonecutter, August Mack, was born on August 13, 1879, in Prust, Germany. His father immagrated to America in 1889 and worked two years in a lime kiln in Wiscosin before he was able to send for his family, August was just twelve years old when he, his mother, and six brothers and sisters arrived on Ellis Island, New York.

Mack was always interested in carving. He carved the date ” 898″ in the foundation of the homestead barn.

At the age of 16, Mack carved a Statue of Christ on the altar of St. John, at St. James Lutheran Church in Reedsville, Wisconsin.

While Mack was working at the Brillion Marble Works in Wisconsin, he noticed some of the stone had been shipped from Bedford, Indiana.

At the age of 22, he married Anna Roselia Sohn, 19, of Reedsville, Wisconsin, and in 1905 decided to move to Oolitic, Indiana. He moved away for a short time during the Great Depression after he had to close the tavern he owned due to Prohibition. He didn’t leave for long and moved back to Oolitic a few months later.

Mack’s earliest works included a limestone eagle that was put on the exterior of an Oolitic building that later was destroyed in a fire.

During the Depression, Mack carved stone objects and sold them. He later carved various statues including the original Santa that stood at Santa Claus Land now known as Holiday World. That statue stood until it was destroyed by a storm in 1970. He also carved fourteen Mother Goose characters for the amusement park.

Sadly, the carvings he created for Thornton Park in Bedford are no longer there. Vandals broke, defaced or carried off the eagles, bears, and other creatures carved from Limestone.

The only limestone pieces by August Mack in the area include a bust of the late humorist Will Rogers and a limestone frog at Thornton Park.

E.R.E. (Edgar) Murphy was born in New Albany, Indiana April 29, 1938. He moved to Bedford in 1868 and entered the stone carving business with W.H. Lane. The two were partners for two years before he assumed the business and partnered with Thomas H. Mallott from 1879-1883. He then becomes associated with Arthur Fullen.

E.R. Murphy was credited with the first momument shop in Bedford. Several of his tools are still on display at the Lawrence County Musuem.

Some of his carvings include a hand marble clock which he carved in the early 1880s.