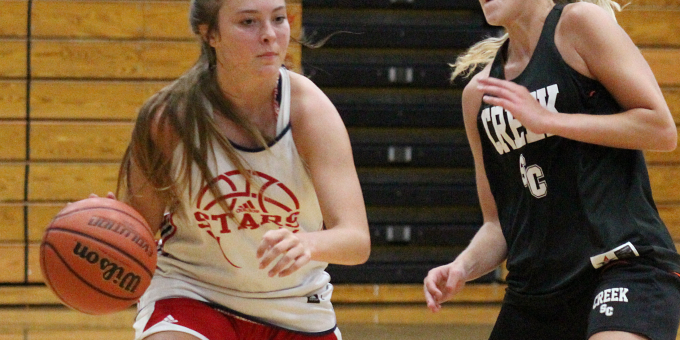 BEDFORD – Look up “soft-spoken” in the dictionary, and there is Madisyn Bailey’s picture. She’s also the Seinfeld definition of a low talker. Quiet, calm, pleasant, gentle in nature. On the basketball court, she speaks softly and carries a big game.

With superstar sophomore Chloe Spreen absent Monday while competing for a spot on the USA Basketball national U-16 team, Bedford North Lawrence needed someone to fill that significant void. Bailey did that quite loudly, scoring 20 points as the Stars conquered Silver Creek 60-47 in the final home scrimmage of the June schedule.

The Dragons, the defending Class 3A state champions, were breathing some fire, owning a 24-23 lead at halftime, when Bailey spurred a BNL charge. She scored three quick baskets for a 33-26 advantage, Kern turned a steal into a layup, Emma Brown got loose for a basket, and Bailey sniped a corner trey for a 41-26 lead. Those were BNL’s best moments.

Don’t be mistaken. BNL doesn’t want to play any extended time without Spreen when the 2021-22 campaign begins. With good reason. But if necessary, the Stars still have capable firepower. They learned that with a quality win over a quality program.

“I really think this is good for us,” BNL coach Jeff Allen, fresh from guiding the Indiana All-Stars last week, said. “Having Chloe is obviously a plus, and everything runs a little smoother, but we talk about when you get in the situations where you miss an important piece of your machine. You have to make things happen. And they’re gaining confidence that we can play without her, if we have to.”

Bailey’s game is usually not self-centered. She tends to look pass first, especially in the open court, where her decision making is almost always on point. With Spreen gone, she shifted to a more offensive posture. She will need to do that more often when she steps into the starting lineup this winter and takes over for some graduated talent.

“Whenever Chloe is gone, we’re going to need more people to step up and score,” Bailey said. “It gave us a lot more confidence, that we can still win without her.”

“We know Madisyn has one of the best basketball IQs on the team.” Allen said. “She knows when to turn it on and off. She did a great job of picking her spots. She’s only going to get better offensively.”

Silver Creek, which lost three starters to college programs, is in a similar situation. Emme Rooney hit three bombs and scored 20 points, while Kynidi Striverson (an Indiana Junior All-Star) totaled 15 points. The battle with BNL, which will be reenacted during the coming regular season, was part of the rebuilding process.

“We lost some major pieces, three college players,” Silver Creek coach Scott Schoen said. “We have other kids starting to figure themselves out. We’re starting to scratch who we’re going to be.

“We take this game serious. Whenever we play Bedford, in the summer or the season, that’s what they’re known for. They sit down and guard you.”

And then he smiled, realizing the Stars were not at full strength.

“I know they’re missing a kid,” Schoen said, in true Seinfeld comedic form. “She’s OK. I don’t know if she’ll help them a whole lot.” That was said in jest, of course. He knows too well what the Dragons will face when they make the return trip to BNL Fieldhouse later on.

BNL will now wrap up the scrimmages on the road, facing Franklin and Washington on Thursday at Washington before visiting Castle next week.