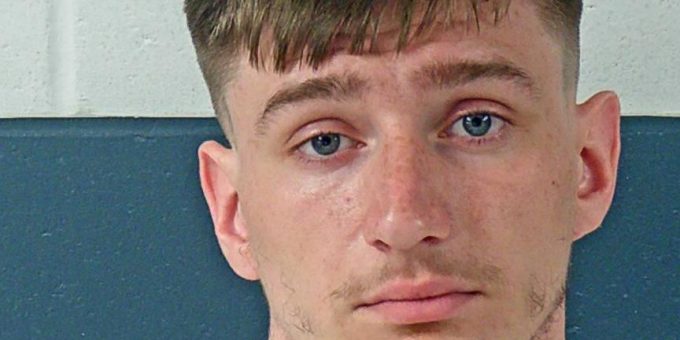 MITCHELL – A Columbus man was arrested Thursday after Lawrence County Sheriff’s Department deputies were requested to a home on Lawrenceport and Hollace Chastain roads after a report of a domestic fight and a male taking off in a woman’s green Ford Explorer.

As a deputy turned onto Lawrenceport Road he noticed a silver SUV sitting off the west side of the road.

The officer pulled up to the vehicle. The female driver of the vehicle told the officer she had been flagged down by the female victim and a young female who needed help.

The victim told police her ex-boyfriend had threatened her with a knife and took off with their son and her vehicle.

The driver and victim were instructed to go to McDonald’s and wait for an officer.

Dispatch reported the male, who reportedly stole the vehicle, had just called and was requesting an officer to the 600 block of West Frank Street in Mitchell.

Officers responded to the home.

When they arrived they found 21-year-old Robert Riley, holding a toddler and an older woman standing by him next to the alleged stolen green Ford Explorer.

Riley told police he and the female were going to Mill Creek Road to a bridge to see a waterfall. He was driving the vehicle. In the vehicle were the female, the couple’s young son, and the victim’s 4-year-old daughter. Riley and the female got into an argument. He stopped the car on Lawrenceport Road and he got out and sat on the back bumper to calm down.

The female got in the driver’s seat and took off dragging Riley down the road. He fell on the ground and the female stopped and got out to see if Riley was okay.

He then opened the back passenger door and grabbed his son and put him in his car seat.

He then grabbed the young female and gave her to the victim. He jumped back in the vehicle and told the woman he was leaving.

Riley then went to his mother’s house on West Frank Street.

Riley told police he wanted to file charges against the female for dragging him behind the vehicle.

Riley told the officer he was not giving his son back to the female.

It was determined that Riley did not have a custody agreement with the court. The officer told Riley in  the state of Indiana regardless if he signed the birth certificate, the mother has full custody. Riley continued to say he was not going to give his son back to the woman.

At the same time, another officer was speaking to the female at McDonald’s. She and the officer then went to the home on West Frank Street.

The woman told police, she and Riley got into an argument and Riley had pulled her hair. He then pulled over and got out and was sitting on the back bumper. She jumped in the driver’s seat and took off. She looked back to see Riley laying on the ground with a knife in his hand.

She stopped and asked if Riley was okay. She then started yelling for help and flagging people down while Riley was still on the ground.

While the female was talking to the woman who stopped. Riley took off with her vehicle. He then turned around and dropped off the female’s daughter. The woman told police she never told Riley he could take their son or her vehicle.

The officer told Riley to give his son to the female and to put his hands behind his back. Riley stepped away from the officer and told him not to touch him while he was holding his son.

The officer grabbed Riley’s arm and told him to put his hand behind his back. Riley resisted by pulling away from the officer.

The officer gained control of Riley and the toddler was handed to the other officer.

Riley was arrested on charges of auto theft and resisting arrest.