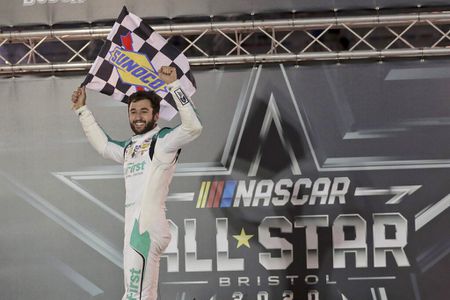 FORT WORTH, TX – Chase Briscoe started 9th and finished 4th in the NASCAR All-Star Open Sunday, at Texas Motor Speedway in Fort Worth.

Winning the race was Aric Almirola of Stewart-Haas Racing (Ford).

The All-Star Open was the undercard event to the NASCAR All-Star Race, where non-qualified drivers attempted to race their way into the All-Star Race by winning any one of the race’s three stages or by winning the fan vote.

“We had a really fast Ford Performance Racing School Mustang, and I really thought we were going to have a chance to race our way in,” said Briscoe. “Unfortunately, that incident with the 43 sent us back further than we needed to be and really messed up our handling. It would’ve been cool to race for a million dollars, but it was still fun to be out there and running up front.”

During Stage 1, Briscoe powered his way into the fourth position on the first lap of the first stage. The first caution flag was shown on lap six, and Briscoe inherited the second position for the restart on lap eight. The Ford Performance Racing School driver maintained the second spot until lap 15, when he received damage on the left-rear quarter panel of his Ford Mustang as the No. 43 spun under him in turn four. Briscoe visited pit road for repairs and restarted in the 11th position on lap 19. He gained one spot to finish the first stage in 10th.

During Stage 2, Briscoe started ninth and finished 10th. The Ford Performance Racing School driver was running as high as seventh before falling back to 10th due to a free-handling Mustang. At the end of the second stage, Briscoe radioed that he couldn’t carry enough speed into the corner without losing the back end. Briscoe pitted at the end of the stage for tires and adjustments.

During the final stage, Briscoe started ninth and finished fourth. With fresh tires, Briscoe restarted ninth on lap 41 and maneuvered his way into the top-five by lap 43. Coming to the line on lap 48 Briscoe was closing the gap on third place, but he was unable to make the pass in the final two laps and ultimately crossed the line in fourth.

The NASCAR Cup Series returns to points-paying racing on Sunday, June 20, with the inaugural Ally 400 at Nashville (Tenn.) Superspeedway. The race gets underway at 3:30 p.m. EDT with live coverage provided by NBCSN and SiriusXM NASCAR Radio.