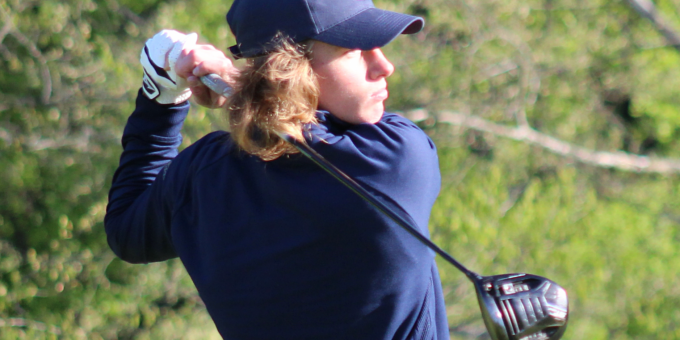 BEDFORD – Golf, which cultivates a love-hate relationship with its vicious circle of supreme satisfaction and ultimate frustration, has been Trevin Hutchinson’s passion since his father gifted him a plastic toy set as a toddler. Years later, he’s finally starting to figure out this maddening, four-letter-word game.

In a sport that glorifies the extreme in distance, success should be defined on the scorecard as how many. It’s not about how. Accuracy still trumps length, a lesson Hutchinson learned and translated into a state finals appearance.

With his driver sheathed and mainly idle last week, Hutchinson scrambled through the sectional and regional, earning an invitation to the final stage of the IHSAA state championship. He will compete in the 36-hole finale at Prairie View Golf Club on Tuesday and Wednesday.

Hutchinson’s epiphany revelation came just in time. As recently as the Hoosier Hills Conference meet, he was not among the team scorers. He sent three wild-driver tee shots out of bounds that day. Enough was enough. He can launch it deep with the best, but it was counterproductive. That finally sunk in.

Change in strategy. Grab the 5-wood, or even a long iron, and find the fairway. Attack the green from a safer distance. Make an easier par rather than a damaging bogey or worse. Result? He fired a 75 in the sectional at Cascades, posted an impressive 74 (using the driver a only three times all day) during the regional at Champions Pointe, and here he is, preparing for the final two rounds of the season.

“I learned you don’t always have to hit driver to score well,” Hutchinson said. “Distance doesn’t always matter, it’s about playing smart. Hitting driver can add strokes if you hit it bad. HItting irons and my 5-iron off the tee, I know I can consistently hit those in the fairway. That gives me birdie putts and keeps my score low.”

The old cliche, which is still true, says ‘drive for show, putt for dough.’ To expound on that, it’s much easier to putt from the green than from the rough.

“His strength has been hitting greens,” BNL coach Mike Wright said. “He is a long-ball hitter, but he really focused on a game plan of not hitting driver. For high school players, that’s very difficult, no matter how many times you tell them that. Knowing when to put the driver in the bag, if he can teach those young guys coming, it’s just hitting it to a spot. You don’t need to hit it far. It sounds real simple.”

Distance is addicting, nothing feels better than blasting a ball 300-plus yards. Of course, that works if those 300 yards are straight, not angled off into the woods, or the water, or off the property. “My driver just was not good this year,” Hutchinson admitted, and that self critique was accurate. Look where he is now.

“I made it to state,” Hutchinson said. “The hardest part was the regional, getting there. From this point forward, I’m not looking to be the winner, I’m just going to play the best I can. I will go into it smart and see what happens.”

The hardest part was also recovering from a preseason left knee injury. Playing a pick-up game at the Boys Club, he landed hard and suffered a deep bone bruise, spent time on crutches, wore a brace during early meets, and struggled to trust the wounded leg. He probably should have rested more and spent time on the sideline, although the doctor decided he could do no additional harm and Hutchinson decided he was not going to watch while others toiled.

“He was very determined to not miss any meets, to help his team,” Wright said. “There were times he said the knee was sore at the end of a round. He wore a brace, and it might have helped his knee feel better, but it didn’t help his mental state.

“He had set a goal of making it to state, and we all can say that. That’s the goal we’re all supposed to have. But to say it and do it is something different. He had the skills to do it. It took a while this spring for him to put it all together. It’s just pretty remarkable that he was able to overcome that injury, the mental aspects of it as much as the physical.”

Hutchinson has already started the mental preparation for the two-day tour of Prairie View. He has studied the course, asked questions of those who have competed there, and he will take plenty of notes during his practice round on Monday.

“I’ve already looked at all 18 holes,” he said. “Most of them are perfect for my 5-wood. There are only a couple I will be hitting driver.”

No matter how he finishes, Hutchinson is already looking toward to 2022, his senior season with the Stars. Advancing to the state finals was a rocket boost for his confidence, and a reward for all the work with swing coach Anthony Bradley and the hours spent on the driving range.

“Golf just doesn’t get away from me,” he said. “It’s something I love and will always love.”

Hutchinson is scheduled to tee off on the back nine at 10:15 a.m. in the first round.