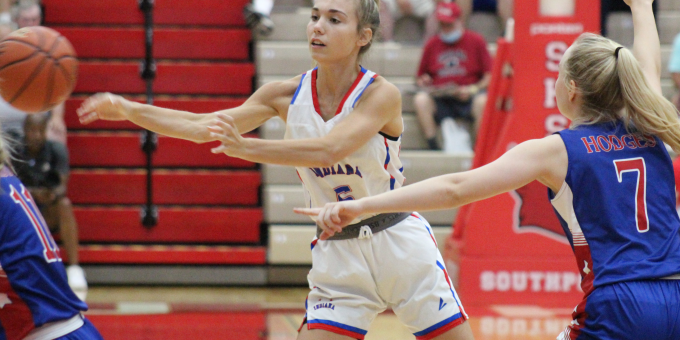 INDIANAPOLIS – The best laid plans of mice, men and All-Star coaches often go awry. That sums up the final nine seconds of Indiana’s agonizing loss to Kentucky in the series finale.

Down one point, with two possessions to win and sweep the rivalry for the first time since 2016, Indiana fumbled away both chances, finishing with a jump ball and a turnover instead of something heroic and memorable. That botched conclusion, and the squandering of a double-digit lead, allowed Kentucky to escape with a 78-76 victory on Saturday at Southport.

Kentucky, short-handed without a couple of major stars but not intimidated by the circumstances, rallied from a 10–point hole in both halves, erased a 5-point lead to start the final quarter, and hit huge shots – less than 24 hours after struggling to make anything from anywhere in the series opener at Owensboro. Their Miss Basketball was absent, but others filled the void for an upset win.

Macey Blevins, on her way to Western Kentucky, was spectacular with 20 points and 12 rebounds, and Dynastee White totaled 21 points as Kentucky cut into Indiana’s series lead (now 51-39), winning on Hoosier soil for the 14th time. Ariana Wiggins paced Indiana with 18 points, while Bedford North Lawrence’s Chloe McKnight swished a pair of early 3-pointers and totaled 6 points in 8 minutes.

Perhaps Indiana should not have been in the last-possession position. Perhaps Kentucky, with Alexa Smiddy missing four free throws in the final 30 seconds, should have already salted victory away. Somehow, during a frantic rush to the end, Indiana was granted a golden chance to steal back what it had seemed to lose.

Following a timeout with 9.2 seconds left, Indiana set up a pick-and-roll with Wiggins and Meg Newman, but Wiggins lost control as she slashed the lane. The jump ball gave Indiana a second chance, out of bounds on the baseline with 4.9 left, but the inbound pass to Katie Burton was kicked away to Kentucky’s possession. White made a free throw with 1.7 left, and Ally Becki’s desperate heave from halfcourt glanced off glass and rim.

Those bites left marks. Indiana played some brilliant minutes, the first a 9-0 run late in the second quarter. Newman’s rebound basket and Becki’s breakaway highlighted a surge to a 44-34 lead. Miss Basketball Jayla Smith started the third quarter with two baskets and Newman converted a reverse layup in transition for a 50-40 lead. And the margin was still 59-50 when Trinity Lutheran’s Sydney Jaynes banked one home from the lane.

But from that point, Kentucky caught fire, going on a 21-6 blast. White started it with a 3-point play, Maria Kiefer converted another and-one bucket in the lane, Smiddy buried a 3-pointer and Blevins bombed another. Kiefer scored twice more from the paint for a 71-65 lead.

“At the end of the day, our kids just needed to see the ball go through the net,” Kentucky coach Kes Murphy said. “They came alive. It was about confidence and believing.”

“We had a lot of opportunities to advance the score, stay out ahead of them,” Allen said. “And we squandered those.”

Indiana battled back with Becki’s lane drive and four Courtney Blakely free throws, the last two forcing a 71-71 deadlock with 3:50 left. Blevins and White rumbled through the lane for baskets and a 75-71 edge. Smith countered with a 20-footer, but Blakely missed a wide-open breakaway layup after a steal, and that stopped some Indiana momentum. Kentucky took a 77-73 lead on White’s 4-footer on the baseline, but couldn’t put Indiana away because of the missed free throws. Who wanted to win this, anyway?

“Of course we had to keep it entertaining,” Murphy said. “When you have Kentucky and Indiana, these kids are fighting and trying to win. The fact we won was a big deal. I didn’t expect it. I wanted to, hoped to, but the odds weren’t in our favor. The kids came up big.”

Ella Thompson added 13 points and 11 rebounds for Kentucky, which shortened its bench (with six players logging 20-plus minutes). Smith and Newman both had 10 points for Indiana.

McKnight made an immediate impact when she came off the bench at the 6:23 mark of the first quarter. She swished her first jumper from the right corner, then followed with a wing trey.

“It was really cool,” McKnight said. “When it left my hand, I knew it was in. Both of them. It was cool to score in an All-Star game. It was a hard, exhausting week, but it was fun. We definitely wanted to beat Kentucky, so it’s disappointing. We played hard.”

Kentucky overcome 22 turnovers with 7 treys (while McKnight’s pair was the only ones Indiana hit) and a 51-44 rebounding edge.

“You have say Kentucky played really well,” Allen said. “I don’t know that we did. I guess the buck stops with me.

“But I wouldn’t trade the experience for anything. I hate losing as much as anybody, and so do the kids, but I thought we represented Indiana well, played hard. We just didn’t come up with plays when we needed to.”

In the boys game, Indiana completed the brooming of Kentucky with an 86-70 triumph. Mr. Basketball Caleb Furst totaled 14 points and 17 rebounds, Shamar Avance had 13 points and 10 rebounds, and Blake Wesley had 12 points for the Hoosiers. Cam Pope had 19 points for Kentucky.

Indiana extended its utter dominance in the series, winning its fifth straight game and sweeping the two games for the 18th time since 1999. The overall Indiana lead now stands at 101-44.