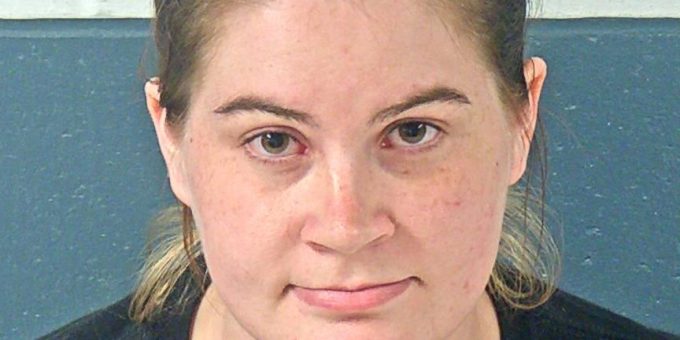 BEDFORD – A Mitchell woman was arrested after a Bedford Police officer was called to the Central Church of Christ at 10:30 p.m. Thursday, to check on the welfare of a female who was in the parking lot.

The caller told police the woman was wearing a black shirt and shorts and carrying a backpack and had been in the parking lot for hours.

When officers arrived 21-year-old Jameelia Grimes, approached them and told the officers she was just waiting for a ride.

Officers then asked for her identification. which she retrieved from her backpack. While retrieving her wallet an officer observed that Grimes was holding the backpack in a manner that appeared that she was trying to prevent officers from seeing inside.

An officer asked her if there was anything illegal inside her backpack. She said no. He then asked permission to search it.

She told the officer the backpack didn’t belong to her.

She then became visibly nervous and was trembling. The officer again asked if there was anything in the backpack and she said “maybe”.

She told police there was a container in the backpack which contained bags of “dope”.

In the bag officers found a plastic container that contained a baggie with crystal meth inside.

While there, a male arrived to pick up Grimes and he was told to leave.

Grimes was arrested on a charge of possession of meth.

Grimes continued to claim the drugs did not belong to her but a friend.