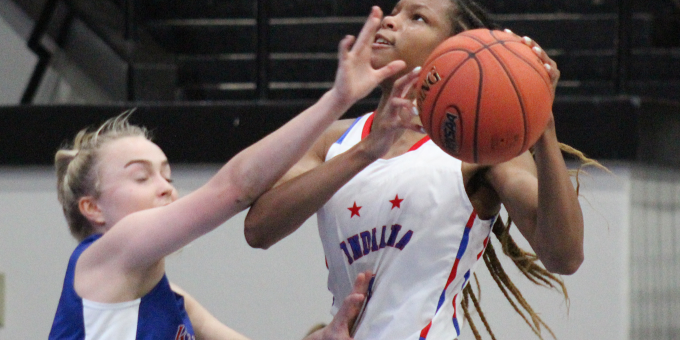 OWENSBORO, Ky. – Jeff Allen, scowling hard enough to cause a major migraine headache, was chomping his chewing gum into submission, a sure sign of frustration as his Indiana All-Stars slogged to a double-digit deficit. Blame it on multiple factors, including the inexplicable tardiness of the officials, but the Hoosiers were difficult to watch.

That finally changed late in the first half, and that poor piece of gum, not to mention Allen’s clinched jaw, had to appreciate the reprieve.

After a sluggish start, Indiana rallied to vanquish Kentucky in the opening game of the annual home-and-home series. Miss Basketball Jayla Smith, on her way to Purdue, scored 13 points as the Hoosiers pulled away for a 69-58 victory on Friday night, stretching their series lead to 51-38. Indiana will seek the sweep on Saturday in the rematch at Southport.

Indiana’s first 14 minutes were an exercise in futility. More air balls than made baskets. More surrendered rebounds than a relationship addict. Kentucky, short handed without its Miss Basketball, bolted to a 24-13 lead as the Hoosiers struggled to score. It was maddening.

The Hoosiers didn’t panic. Ariana Wiggins, a Michigan recruit, got Indiana’s first basket of the second quarter off a steal, Arizona State signee Meg Newman dropped a fadeaway in the lane, Smith buried a 3-pointer in transition, and she capped the half with a layup at the buzzer as Indiana scrambled to a 29-29 deadlock at the half.

Deep breath. Regroup. Indiana, after a dismal shooting performance in the first half, roared to a 10-point lead in the first 8 minutes of the third quarter and kept the Kentuckians at arm’s length the rest of the way.

Allen, who kept Bedford North Lawrence’s perfect All-Star coaching record intact with the win, counted on the offense to eventually click. Perhaps the four-hour bus ride to the Owensboro Sportscenter was an excuse, or maybe the fact the game officials were late and caused a 20-minute delay zapped everyone’s vigor.

“We looked like we didn’t have energy,” Allen said. “I was searching. That’s why you have a bench, to bring kids in to give us a boost. The bench kids did a great job of that and keeping us in the fight until we could get back even.

Indiana hit only 11 of 38 shots (with only 4 assists as quick shots were taken too often) and got cracked 32-20 on the boards during the first two quarters. Those stats don’t fly at BNL, and they were not acceptable at this level. When the Hoosiers changed those numbers, so did the lead.

“It looked like we were stuck in mud,” Allen said. “Kentucky was playing really loose, and we were really tight. A little bit nervous maybe, and that slowed us down. Sometimes that’s a vicious circle. The only way I know to stop it is to get stops on the other end.”

Indiana went on a 15-2 run in the third to take control. Vanessa Shafford converted a transition basket off an Ally Becki pass, Smith turned a steal into a layup, and Courtney Blakely slashed to the lane for three buckets and a 48-34 advantage. Indiana’s biggest lead came at 52-36 on a Wiggins breakout following another Becki steal.

“Turnovers, missed opportunities, missed layups and foul shot, right?” Kentucky coach Kes Murphy asked, knowing the answer. “That hurt big time. In that third quarter, we just didn’t come out and fight, we didn’t have the same intensity. They started coming at us, and we weren’t ourselves. We didn’t play with the same fire.”

Wiggins, Newman and Blakely all contributed 10 points, Becki had a superb hustle game with 9 points and 4 steals, and Burton totaled 7 points. BNL’s Chloe McKnight didn’t score in 5 minutes of action, but she had a steal.

Indiana battled back from the early rebounding woes to finish with a more modest 52-48 deficit in that category. The Hoosiers also forced 22 turnovers, with Smith grabbing 5 steals.

“We didn’t feel frustration, we felt motivated to get back and get in the game,” Smith said. “We picked up our intensity.”

Indiana expects a crisper performance in the rematch.

“Absolutely,” Newman said. “We know we can play better than that. The sky is the limit for this team.”

In the boys game, Indiana scored 14 consecutive points in the first quarter, blasted to a 30-9 lead, and cruised to a 93-70 triumph that was the 100th for the Hoosiers in the series.