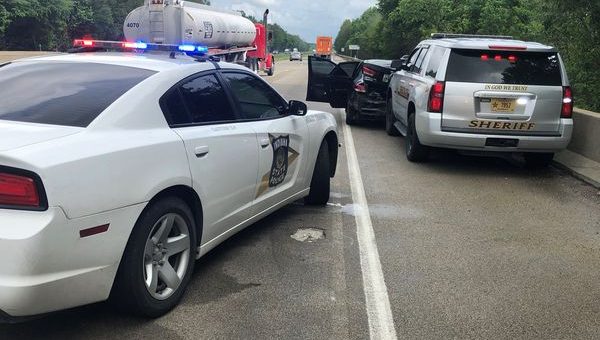 JACKSON CO – On Wednesday afternoon, two Tennessee women were arrested on numerous charges after they stole numerous items from an Edinburgh store and then fled in a vehicle after Indiana State Police troopers attempted to stop them on I-65 in Jackson County.

The women were taken into custody after being involved in an accident with a Jackson County Sheriff’s Deputy in Scott County, Indiana.

The incident began at approximately 4:00 p.m. when a dispatch was issued for a vehicle involved in a theft from the Polo Ralph Lauren Store at the Premium Outlet Mall in Edinburgh.

The Kia Optima passenger car occupied by two women was reported to have gotten on I-65 Southbound from Edinburgh. Numerous troopers from the Indiana State Police as well as officers from the Jackson County Sheriff’s Department and Crothersville Police Department began looking for the vehicle.

A trooper soon observed a vehicle matching the description traveling southbound near the 40-mile marker in Jackson County.

Upon attempting to stop the vehicle, the driver, identified as 22-year-old Tatyana J. Burgess, of Antioch, Tennessee accelerated and fled. Officers from other agencies attempted to place tire deflation devices on the road at other locations.

Burgess eventually struck a tire deflation device placed by an officer with the Austin Police Department near the Austin exit in northern Scott County. Near the 32-mile marker, Burgess suddenly applied the brakes while on the right shoulder of I-65. Jackson County Sheriff’s Deputy Zach Elliott’s Chevrolet Tahoe collided with the rear of Burgess’ vehicle, ending the pursuit.

Burgess and her front seat passenger, 20-year-old Jernithia A. Bell, of Nashville, Tennessee were then taken into custody.

The Edinburgh Police Department responded to the scene and collected numerous items allegedly stolen from the Polo Ralph Lauren store. Items believed to have been stolen from other stores were also located in the vehicle.

Both Burgess and Bell were transported to Schneck Medical Center in Seymour, after complaining of minor injuries. They were both medically cleared and transported to the Jackson County Jail where they were incarcerated.

Both Burgess and Bell may also face additional charges in Bartholomew County, related to the theft

On May 26, 2021, an ISP trooper arrested two Louisville, Kentucky women on I-65 in Jackson County who had stolen approximately $7,000 from the same Polo Ralph Lauren store in Edinburgh.

Approximately an hour later on that same day, the trooper attempted to stop another Louisville, Kentucky woman who allegedly stole thousands of dollars of clothing from the same store.

That woman, Ta’neasha Chappell, led Trp. Clark and numerous other officers on a pursuit through three counties before finally crashing and being arrested in southern Clark County, Indiana.

Officers believe all of these incidents may be connected