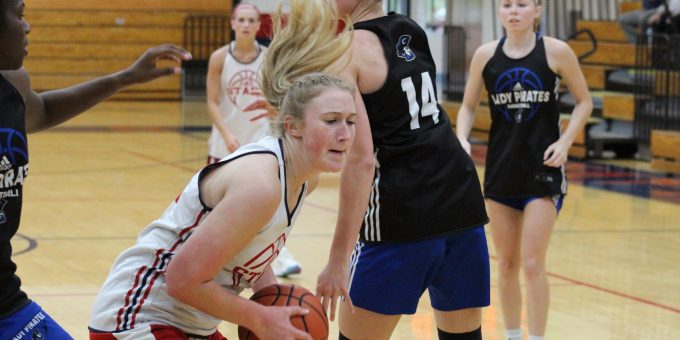 BEDFORD – Defense, one of the cornerstones of Bedford North Lawrence’s program, is all about effort and pride. So it’s quite natural for a kid named Pride, who plays with maximum intensity and defends like a demon, to be one of the heir apparents for a key role in 2021-22.

With head coach Jeff Allen currently guiding the Indiana All-Stars, with superstar Chloe Spreen absent while competing for a spot on the U-16 national squad, the Stars relied on defense during another scrimmage test on Thursday afternoon. The offense sputtered a little without the main weapon, but everyone wearing a white jersey can guard the opposition. At least they better.

Pride and Carlee Kern were key interior plugs as BNL shut down Charlestown 48-35 during the second home scrimmage of the important June sessions. Karsyn Norman scored 21 points, and BNL’s surge to the front late in the first half was triggered by the hawkish defenders.

The Pirates pulled even at 17-17 when the Stars took control. Norman hit one of her patented step-back 3-pointers, Madisyn Bailey turned a steal into a transition basket, and Pride sliced her way to a 3-point play following a turnover. That burst pushed BNL to a 25-19 halftime lead, and the Stars stretched out to double digits for most of the second half.

“We really thought our defense did a lot for us,” BNL assistant coach Mandy Harrell said. “We had a couple of moments where we were struggling to score, which is natural with Chloe not being here. But toward the end of the second quarter, we really buckled down and put a lot of pressure on, got stops, and that really got us going offensively.”

Spreen’s void allowed others to shoulder more of the offense. Pride scored 7 points, in fact everyone who played got into the act. But what BNL learned, should Spreen ever miss time during the regular season, is the impact she has on the defensive end. She’s a vocal leader.

“We need to talk a lot,” Pride said. “Chloe is a big key on our team, getting rebounds and the offense. And she does a lot of talking.”

Pride’s performance spoke volumes for the future. The Stars will lack size for the second straight season, but hustle and determination can make up for shortcomings (pun intended). Pride, a crafty left-hander, isn’t a natural inside, but she’s learning on the fly and gaining confidence during this busy month.

“It’s important to work on the post,” Pride said. “I grew up doing the post, but then I went back to forward. I’m not as big as other post players, so I have to work around them. It’s trial and error on a lot of things.“

Charlestown, coming off an 8-11 campaign a year ago under six-year veteran coach Scott Mathews, has some perimeter pop with Tatum McFarland (9 points, all treys) and Kennedy Coleman (8 points). BNL’s focus was taking away Demaria King (who averaged 9.2 points and 9.4 rebounds a year ago) in the paint.

“This group has aggressive defenders,” Harrell said. “We’ve seen that, these are kids that are really scrappy. A couple of our post players stepped up, with Carlee Kern guarding (King), with Ella (Turner) and Mallory giving her a hard time. We’re going to need that.”

BNL will finish the home portion of the June scrimmages on Monday, welcoming defending Class 3A state champion SIlver Creek.