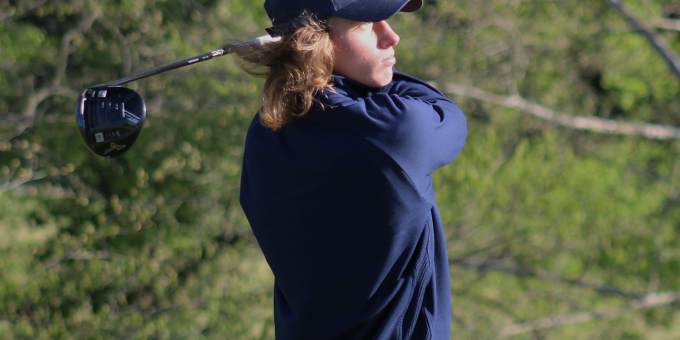 HENRYVILLE – Bedford North Lawrence’s Trevin Hutchinson, poised to claim a coveted ticket to the IHSAA state championship, knew exactly what was at stake. With three holes left, he was red hot, under par for the round, and just a few swings from fulfilling a dream.

That’s when the nerves started to attack, to betray him as he struggled toward the clubhouse. On the final hole, as he prepared to hit his iron approach, his hands were shaking. As he lined up his putt to close out his Thursday tour of Champions Pointe, his entire body was trembling.

When that final putt fell, Hutchinson was overwhelmed by the emotion. He had survived a gauntlet of mental stress, carding a 2-over 74, a superb day that included four birdies, and earning a berth for the two rounds of the state finals at Prairie View.

BNL came up short in its quest to qualify as a team, finishing 7th in the loaded regional field with a team score of 322. The top three teams advanced to the final stage of the state tournament series, and the top five players who were not members of qualifying teams advanced as individuals. That’s how Hutchinson made it, grabbing the fifth and final golden ticket.

Hutchinson’s journey this season was one of perseverance. He started the year on crutches, the result of a basketball injury suffered at the Boys Club. He fell hard and landed on his left knee, suffering a painful bone bruise. After missing 2020 when the entire spring sports season was cancelled, his 2021 campaign was in jeopardy. What a turnaround.

“When you think of the experience he had as a player this season, he finally put it together this week,” BNL coach Mike Wright said. “He played like we knew he could. The part between the ears got in his way sometimes.

“It was a big stage, and these guys had not played in a tournament until April. Two months later, here we are on the big stage, a big course, and you’re asked to play 18 holes with a chance to go to the state tournament. I get it, it was a little nerve racking.”

Before his melting finish, Hutchinson was ice: hard and pure. Starting on the back nine, he made the turn with a terrific 30-foot birdie on the infamous 18th for a first-side 38. That spurred him to greatness with three birdies on a four-hole stretch (3-6) that got him to 1-under. That’s where the nerves started to rise up, when he broke one of golf’s cardinal rules and started to think ahead.

“I knew my score was low enough to be close to getting out,” he said. “I was just thinking a lot and shaking super bad. I was so nervous and sweating so bad. I was shaking so bad.”

After a three-putt bogey on the 7th green, after a follow-up bogey on 8, with his mental motor spewing oil, Hutchinson planted his second shot on the green, 20 feet from the flag, on the final hole. He found a way to get down in three putts.

“Things got a little nervous,” Wright said. “He was getting ready to hit his approach on 18, and he said ‘My hands are shaking.’”

“It’s so emotional, getting to the state after messing up my knee at the start of the season, it’s hard to think about,” Hutchinson said. “I think that motivated me more, to practice and get back to playing like I used to. I’m super proud of myself, and I can’t thank people enough (his swing coach Anthony Bradley and his father) for everyone who got me to this point.”

Despite the balky conclusion, his putter was actually the key club in the bag.

“I practiced so much,” Hutchinson said. “After having 36 putts and shooting 75 (in the sectional at Cascades on Monday), I practiced my putting a lot. It worked.”

BNL, which missed the cutoff for the third team position by 15 shots, had other notable scores. Ramzi Girgis carded a season-best 76 that included an eagle on the par-5 6th hole, and he played the front nine in a blistering 3-under 33. Colten Girgis finished with an 81, and Jett Jones capped the scoring with 91.

“I’m proud of them. These guys have been the most satisfying to watch because they have improved. You can appreciate it a little more.”

Franklin’s Damon Dickey was the individual medalist with a 3-under 69, while Silver Creek’s Carter Smith shot 70.

Prairie View will host the state finals on Tuesday and Wednesday.