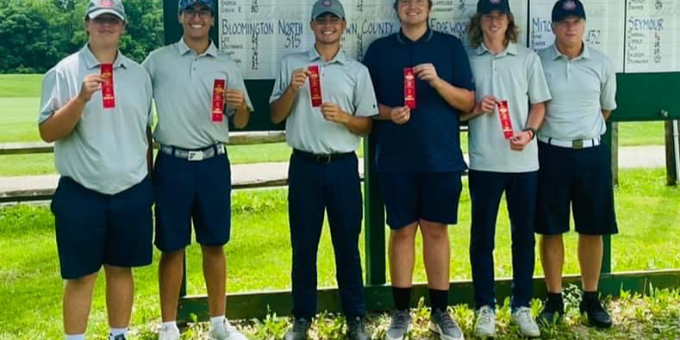 BLOOMINGTON – With a large gallery – most of them the winged, loud, annoying variety – cheering and humming, Bedford North Lawrence advanced to the IHSAA golf regional with a loud performance in the sectional at Cascades on Monday.

The Stars, ignoring the constant droning of the cicadas that made the golf course come alive, fired a season-best team score of 301 to finish second and qualify for the regional at Champions Pointe. The top three teams, plus the top three individuals who were not members of qualifying teams, earned the invitation to the second stage of the state tournament series.

No.5 Bloomington South won the sectional title with a blazing 288, while Bloomington North was third in the 12-team field with 315.

BNL, swarming and humming like the 17-year intruders, peaked at the perfect time. Colten Girgis led the charge with a 1-over 72 (with only one birdie), Camden Andrick continued his rapid improvement with a season-best 74 that featured four birdies, and Trevin Hutchinson carded 75.

“That’s a pretty nice score,” BNL coach Mike Wright said. “You play under the pressure of a sectional, and swarm of cicadas. It was another great outing. I’ve never had a team that just kept going strong on the stepping stones of improving. If we can do that Thursday (in the regional), it would be really impressive.”

Girgis posted his only birdie on the second hole, sniping a tee shot to 3 feet on the par-3 test. He closed with a bogey on the 230-yard par-3 finishing hole, and the majority of the round was a collection of pars and the swatting of cicadas that would land on him mid swing. He lamented his wedge play, for not setting up better looks at birdie, and his 34 putts.

“The score said I played well, but I didn’t think so,” Girgis said. “I lipped out a lot of birdie putts. I felt there was a lot of room for improvement. The team score was very special, I‘m more proud of the 301. That’s pretty cool.”

If any player personifies BNL’s recent emergence with lower scores, it’s Andrick. He birdied holes 4, 6, 10 and 13 en route to his career-best score.

“I wasn’t excepting it,” Andrick said. “I‘ve been shooting low, so I was looking to break 80. But I just kept making pars and birdies. My short game clicked today.”

“We’ve been dying for someone to step up, and with all the competition on the team, someone needed to shut the door,” Wright said. “The last month, he’s played better and improved a lot. It kind of came out of nowhere, I wish I had an answer for the reason a kid has knocked off 10 shots from his score. He just wasn’t getting in trouble. If you stay away from penalties, you can score.”

Hutchinson had eight pars on the back nine to solidify his card. Ramzi Girgis completed the scoring for the Stars with 80, and Jett Jones fired an 84.

“It was a very steady round,” Wright said. “The purpose was to get out.”

Happy Gilmore paced South to the title with a 1-under 70. Seymour’s Owen Marshall was the medalist with a fantastic 67 that matched the school record.

BNL will have little time to prepare for the next stage, set for Thursday, and its loaded field. The six sectionals (and 18 teams) that feed into the regional will include five teams ranked in the final poll.

“It’s a quick turnaround,” Wright said. “We played well down there a couple of weeks ago, we knew what places lead to mistakes. Can we improve on 301? We just have to play our best and see what happens. We can’t play defense.”

“I don’t want to go in there with expectations,” Girgis said. “We’ll do what we did today, take one shot at a time and play to best of our ability, play to our strength.”

The top three regional teams, and top five individuals who are not members of qualifying teams, will advance to the state finals at Prairie View on June 15-16.