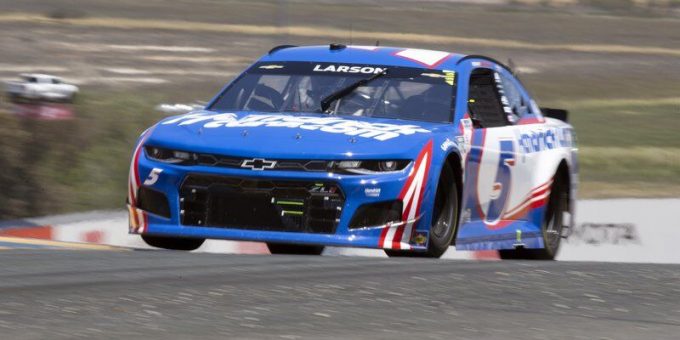 Hendrick drivers have won four straight races dating to Alex Bowman’s May 16 victory. Larson’s win a week ago in the Coca-Cola 600 at Charlotte Motor Speedway made Rick Hendrick the winningest owner in NASCAR history.

So it was expected that one of Hendrick’s four drivers would win again on Sunday, when NASCAR returned to the California wine country for the first time since 2019 because of the pandemic.

Race extended two laps past its scheduled 90-lap distance due to a green-white-checkered finish.

Larson, who had led just 11 laps in six previous combined races at Sonoma, won all three stages Sunday and led a race-high 58 of the 92 laps. The eighth caution sent the race to overtime for a two-race sprint shootout, but he easily cleared Elliott on the restart and pulled away for his first career victory on the 12-turns, 2.52-mile course.

During Stage 1 Briscoe started 25th and finished 11th. The Ford Performance Racing School driver gained four spots on the first lap and was sitting 21st before making a scheduled green-flag pit stop on lap 10. Briscoe pitted for tires and adjustments after reporting his Ford Mustang was lacking forward drive and was tight. He joined the field in 30th but cycled to 17th when the yellow flag was shown on lap 11 for the competition caution. The No. 14 lined up 17th for the restart on lap 14 and advanced to 11th before the end of the first stage. At the stage break, Briscoe radioed that his forward drive was better, but his Ford Performance Racing School Mustang was still tight, especially in turn six. He pitted for tires, fuel, and a track bar adjustment under caution and lined up 25th for the beginning of Stage 2.

Kyle Larson was the winner of both Stage 1 and Stage 2.

In Stage 2, Briscoe started 25th and finished 32nd. The No. 14 Ford Mustang was sitting 21st when the third caution of the race occurred on lap 32. Briscoe reported he was still tight, but the team elected to stay on track and lined up to start seventh for the lap-35 restart. On lap 38, crew chief Johnny Klausmeier called Briscoe to pit road for a scheduled green-flag stop for tires, fuel and adjustments. He rejoined the field in 32nd and stayed on track when the stage ended to restart 18th.

During the final stage of the race, laps 41-92, Briscoe started 18th and finished 17th. The Ford Performance Racing School driver slipped back to 21st on the first lap of the final stage but steadily worked his way through the field to enter the top-10 on lap 55. Briscoe was running eighth on lap 63 when he visited pit road for a scheduled green-flag pit stop. He received tires, fuel and an adjustment to free up the No. 14 Ford Mustang on the right-handed turns. The No. 14 cycled out 18th and was running 17th when the yellow flag was shown on lap 72. Briscoe pitted on lap 74 for fresh tires, fuel and one final adjustment for the final 16 laps. Briscoe restarted 20th and powered through two additional cautions, and overtime, to finish 17th in his first start at Sonoma.

“Getting time on track yesterday (Saturday) in the ARCA West race was good for learning the track, but there wasn’t much outside of that I could take away with the cars being so different,” said Briscoe. “I just could never get the car to really do what I wanted it to do. We really struggled with forward drive, which, if we had been able to have practice, we could’ve worked on some of that. It’s just hard to make those adjustments during a race. Johnny (Klausmeier, crew chief) made the right calls to get track position, but the cautions didn’t fall like we were hoping. To come out top-20 and learn a lot throughout the race is really all we can ask for right now.”

Kyle Larson won the Save Mart 350k to score his ninth career NASCAR Cup Series victory, his third of the season, his first at Sonoma, and his first on a road course. His margin over second-place Chase Elliott was .614 of a second. Thirty-three of the 37 drivers in the Save Mart 350k finished on the lead lap.

There were eight caution periods for a total of 18 laps.

Denny Hamlin remains the championship leader after Sonoma with a 47-point advantage over second-place Larson.

The next event on the NASCAR Cup Series schedule is the nonpoints NASCAR All-Star Race on Sunday, June 13, at Texas Motor Speedway in Fort Worth. The race starts at 8 p.m. EDT