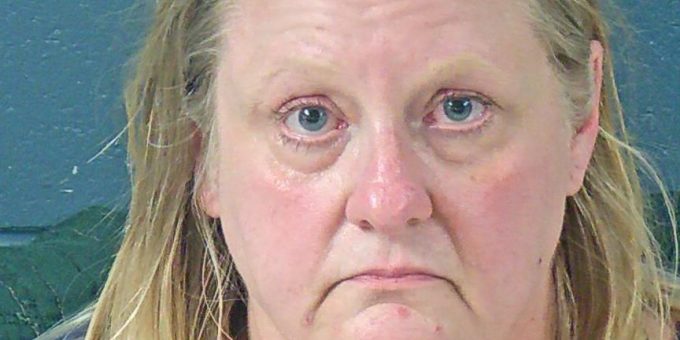 BEDFORD – A Bedford woman was arrested on a warrant after Bedford Police Department investigators say she stole items from Walmart on April 17.

According to a probable cause affidavit, on April 26, investigators received information from the store’s access officer that reported a female had stolen items from the store.

On April 17th a female parked her black vehicle outside of the grocery entrance at 8:12 a.m. She then entered the store and shopped for about two hours making multiple selections from various departments throughout the store.

Once finished making her selections, the woman took her items to a self checkout register.

The woman, later identified as 51-year-old Denna Cooper, moved a runner rug into the bagging area without scanning it. She is then captured on video stacking items on top of a cheap dog bowl and bagging the items.  She scanned the dog bowl but not the other items.

She then bagged three candles, but only two were properly scanned. Then, she reused the already scanned cheap dog bowl to, again, move items over the scanning area and bag them, only scanning the cheap  dog bowl again.

The female then scanned a rug of lesser value three times, two of those scans were in place of more expensive rugs. Next, she only scanned spoons four times, but had at least seven packages of them. Additional items  were then bagged without being scanned, such as an extension cord, wall plate covers, a throw blanket, washcloths, kitchen hand towels and towel set,  tablecloth, beach towels, curtain sets, and cat food. Additional items, such as  a kitchen rug, a cookware set, and the runner rug that she had moved into the  bagging area at the beginning of the transaction, were never attempted to be  scanned.

There were additional items in the cart that were unable to be  identified; therefore, they are not being included in the theft receipt.

Once finished with her transaction, the female rendered payment via an electronic form of payment. She then passed all final points of sale and exited the store.

Investigators attempted to contact Cooper by telephone but she never returned the investigator’s phone calls.

A Bedford police officer did speak to Cooper on April 28 when she was again caught by a store employee stealing items at the store. During that time, Cooper did admit to stealing one rug she failed to pay for.

The investigators filed a no-trespass order against Cooper and forwarded the information to the Lawrence County Prosecutor’s Office. A warrant was issued for Cooper’s arrest on a charge of theft.