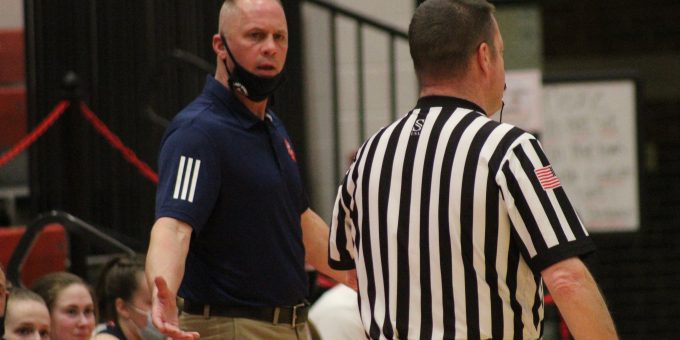 BEDFORD – Second chances are rare, and should not be wasted. If one is granted, author Nishan Panwar noted, “take advantage of it because it’s a gift, and it may be something better than you had before!” Bedford North Lawrence’s Jeff Allen could not agree more.

Allen, who was scheduled to coach the girls Indiana All-Stars in 2020, was denied that once-in-a-lifetime moment when the exploding virus forced the annual series with Kentucky to be cancelled last year. Indiana’s game officials took that into consideration and named Allen to guide the 2021 edition of the Hoosiers, and this roster will include one of his Stars. How cool is that?

Allen and the Indiana girls, featuring BNL’s own Chloe McKnight, will clash with their Kentucky counterparts on Friday night (at the Owensboro Sportscenter) and Saturday (at Southport) in the renewal of the rivalry with the southern neighbors. Indiana leads the series, which started in 1976, by a 50-38 count, having split the series in 2019 when BNL’s Jorie Allen was Miss Basketball.

No pressure, of course. Insert your own eye roll.

“I’m trying to enjoy it and not worry so much,” Allen said. “I’m all about winning, and that will be my focus. But I’m trying to enjoy the opportunity to do this. You only get to do it once. So I’m trying not to put much pressure on myself to worry about the winning part.

“But it is a focus. There’s a lot of pride in Indiana. We have a series lead and we don’t want to relinquish any of that lead. We’ll got out and play extremely hard. To me, that’s the big thing. If we play together and play hard, we’ll win.”

That’s the tough part of guiding the All-Stars: getting a roster of 12 talented individuals, who are accustomed to the spotlight, to come together on short notice and succeed in a team format. Egos can be a bigger obstacle than the Kentuckians. Allen, with the assistance of Noblesville’s Donna Buckley Northridge’s Doug Springer, believes that will not be an issue. They got the first glimpse of the squad during a one-day, double-practice session workout.

“We got a lot accomplished, as far as basketball and getting to know each other, getting a feel for the type of kid we have,” Allen said. “They’re very talented players, that goes without saying. But this bunch is very team oriented. That’s more rare on the All-Star side.

“They’re looking to win as a team, and you can see it when they play together because they share the basketball pretty well. They have a good feel for each other, so it will be a fun group from that standpoint. They’re focused on winning, and that can make it fun.”

Indiana will be led by Jayla Smith, the Miss Basketball from Lawrence North and Purdue recruit who averaged 19.4 points, 3.7 rebounds, 2.0 assists and 4.8 steals. Other notable Hoosiers (especially those who battled BNL last season) will include Heritage Christian’s Ariana Wiggins (on her way to Michigan), Brownsburg’s Ally Becki (Ball State) and North Central’s Meg Newman (Arizona State).

And of course, McKnight will add her perimeter firepower. McKnight, on her way to Saint Francis, averaged 13.7 points, 4.6 rebounds and 2.6 steals per game as the Stars finished 22-3. She also finished fifth on the school’s career scoring list.

“I think she’ll be great,” Allen said. “When you look up and down the roster, everyone is capable of contributing. She’s an intelligent player, she has a great offensive skill set. She’s team oriented, so she will do what it takes for the team to win. She will pick her spots, and if someone leaves her open they will pay the price. It’s always nice to have a kid on your bench to shoot it like Chloe.”

“They look like they’re small and athletic,” Allen said. “I think we have great speed at the guards, so we’ll be able to match up. And we have some good bigs to cause them problems.”

The All-Stars will scrimmage their Junior counterparts on Wednesday at Brownsburg (with the crowd limited to 2,000). The series opener is set for 6 p.m. (Central time) in Owensboro on Friday (crowd limited to 1,300), with the finale at Southport (limited to 3,500). That gives the Hoosiers a few days to finish their work. While some familiar BNL sets will be worked in, the All-Stars will have their own identity.

“Our BNL stuff takes a lot of practice. There will be a few sets you might recognize, and definitely recognize how hard we play,” Allen said. “I would think that will be a carryover. These kids are all high-level players. But a lot of times we will be putting them in certain situations and letting them make basketball plays. And I’m all about defending and rebounding. We want to make Kentucky take tough shots and go rebound.”