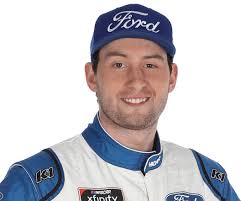 Two weekends ago, Briscoe scored his first NASCAR Cup Series top-10, a career-best sixth at Circuit of the Americas in Austin, Texas.

While Cup Series racing has admittedly been a big adjustment for the rookie driver, road-course racing is where Briscoe’s adaptability is on full display. The dirt racer from Mitchell, Indiana, earned his first NASCAR Xfinity Series win in the inaugural race at the Charlotte Roval and last year became the first driver to win a NASCAR race on the Indianapolis Motor Speedway road course, when he locked in his fifth win in an eventual nine-win Xfinity Series season.

Though Sunday’s Save Mart 350k marks Briscoe’s first start at Sonoma, the Ford Performance Racing School driver finished among the top-10 in all but three of the 10 road-course races in which he completed in the Xfinity Series. And in his lone NASCAR Camping World Truck Series start on a road course – in 2017 at Canadian Tire Motorsport Park in Bowmanville, Ontario – Briscoe finished seventh in a Ford F-150.

On Saturday, Briscoe will make his return to the ARCA Racing Series, competing in the ARCA West race for Chad Bryant Racing. The 2016 ARCA champion and Rookie of the Year will pilot the No. 14 Huffy Bicycles/Parker Boats Ford Fusion.

With 15 Cup Series races complete, Briscoe sits 25th in the point standings and leads the Rookie of the Year standings by 86 markers over Anthony Alfredo.

You pulled double duty at Charlotte last weekend and ran up front for a bit during the Xfinity Series race. Does that help boost your confidence when you get back in the Cup Series car?

The Cup Series side can wear on your confidence and, I guess, make some people question your stock in the sport. People wonder if you can still drive after five months of not running up front, so to go and run in the Xfinity Series and lead about half the race, it felt good. It helped my confidence to remind me I can still do it. The car is so important and, on the Cup Series side, we are a little off. So, once we can get that sorted out and get the cars back to where they need to be, we’re going to be capable of running up front. It’s just going to take some time and we’re all trying to figure out what we need. As a rookie with no practice, it makes it that much harder. We definitely feel like the cards are stacked against us but we’re learning with each race and I still feel like I’ve learned a lot over these last 15 races.”

It’s your first race at Sonoma this weekend. What are you most concerned about in your debut there?

“Of all the places to go and not have practice, this is certainly not ideal. I’m going to run the ARCA West race on Saturday and that will give me a chance to at least see the track. I’m excited to do that and get back to the ARCA Series with Chad Bryant Racing. Chad was my crew chief when I won the championship back in 2016, so it’ll be fun to be back working with that group and to have a chance to feel out the track before Sunday. I’m just hoping I know which way to turn on the racetrack. Sonoma is the only track I’ve never been to before in any kind of car. Luckily, we have the simulator and iRacing and all these things where I can be the most prepared that I can be, but there’s still nothing like getting out there for real and just trying to see the racetrack. I don’t know what the tires are going to feel like, or how much they fall off, or how much to save, what curbs you can hit, what curbs you can’t hit. There are so many variables that, until I get there, it’s going to be hard to say, but I’m excited. In the past, Sprint car guys have had a lot of success at Sonoma. Tony (Stewart) was always really good there. (Kyle) Larson is good there. Everybody I’ve talked to says it’s extremely slick and worn out and I love slick and worn-out racetracks. Sonoma is one I’ve been really wanting to get to for a long time, so I’m excited to finally go there this year.”