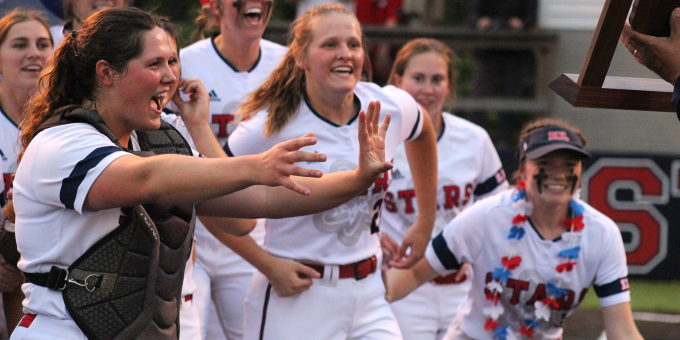 BEDFORD – The classic confrontation, epic in scope, was heavy with drama and inevitable consequence. The undefeated pitching ace against the feared slugger. The bases loaded, a championship in the balance.

Who won the duel? With one lightning-bolt lash, a perfect swing, a thunderous crack and a pose of pure admiration as that ball rocketed over the fence, Sarah Stone powered Bedford North Lawrence to a regional title. The explosion, of the ball off that bat and the emotional eruption from the dugout, from the swarm of fans surrounding the battleground, will be heard for years.

Stone’s monster grand slam in the bottom of the fifth inning muscled the No.8 Stars to a thrilling 5-2 victory over No.15 Gibson Southern in the Class 4A regional on Tuesday. The Stars (28-4) advanced to the semistate semifinal at Center Grove, where they will face Mt. Vernon (Fortville) in the opener on Saturday.

Here’s the scene, one that will live forever in BNL lore. The Stars owned a 1-0 lead, without a hit, with two outs in the fifth against Titans star Olivia Stunkel, who was showcasing exactly why she was undefeated (18-0) in the circle. She finally showed her first cracks in the armor, walking Brylee Blackwell and Aliza Jewell, the final two batters in the BNL order. Lauryn Anderson followed with a bunt single to load the bases.

That sent Stone to the plate, with no open base to put her on. She’s been walked intentionally before in that same scenario, although not with a regional on the line. Gibson Southern coach Gary May chose to challenge BNL’s best with his best. Ball 1, strike 1 looking.

The next pitch will go down in history. Stone connected, crushing a tape-measure blast to dead center field. That ball had to be lopsided when it landed, over halfway up the hill that looms behind the fence, into the second layer of fans with the perfect view. That tape measure better be a long one, for the blast was 275 feet if it was an inch. BNL’s second and final hit was the knockout blow as the Stars took a 5-0 lead.

“I absolutely love that situation,” Stone said. “That was a lot of adrenaline. I didn’t even see where it hit.” The radar from the airport probably picked it up, headed toward Heltonville.

“All I know is I can’t wait to watch the video, because the place exploded like I’ve never heard it,” BNL coach Brad Gilbert said. “Yes, I’m glad Sarah Stone is on our team.”

The Titans (25-5) got two runs in the seventh, on a blast by Lauren Elpers, but Annie Waggoner capped her complete-game twirling with a strikeout to set off BNL’s first regional celebration since 1997.

“It feels amazing,” BNL senior Brynlea Bennett said. “There are no other words.”

BNL got its first run in the fourth. Anderson led off and chopped a grounder to shortstop, forcing a hurried throw with her speed and scampering to second when Hannah Long’s sizzler to first got away. Anderson zipped to third on a wild pitch. After Stone was walked, Waggoner drove in the run with a fielder’s choice.

Then came the tense moments in the fifth. May lamented the walks that preceded the Stone bomb.

“We couldn’t pitch around her,” May said. “Where we messed up was, with two outs, we had the 8-9 hitters up and walked them. You can’t do that against a team like this. They’re too good. If they get hits, they get hits, but you can’t walk them.”

Stone’s titanic homer was her 17th of the season. The others pale in comparison.

Stunkel struck out 9 and allowed only two hits. Her demise, in particular the five walks, was blamed partly on BNL’s turf and the spittle of rain.

“She doesn’t like a new ball, and balls don’t get dirty out here,” May said. “It was wet. She really struggled with that.”

“We just kept fighting and fighting,” Gilbert said. “I know the first time through the lineup, it didn’t look good. I’d be lying if I said I had all the confidence in the world, but I know our kids would find a way to get on base. That’s how scrappy we are. We’re going to fight and wait for the big blow.

“If you don’t succeed the first time, you have to do something different. You can’t do the same thing over and over.”

Waggoner (20-1) was sharp until the end. She struck out 8, relying on the dancing changeup, and allowed 5 hits, including the laser-beam by Olivia Money off Haley Deckard’s glove at first to start the seventh and the towering homer to left by Elpers.

“She attacked their hitters,” Gilbert said. “I could care less about the home run. They’re a good team. She hit her spots and threw hard.”

BNL’s regional was its second in program history. Gilbert won the other one as well, a second-year coach at the time who didn’t realize how tough these trophies are to win. After 24 years, he has learned. “At that time, you think there will be a lot more,” he said.

The Stars will now chase their first semistate crown. Mt. Vernon (Fortville) will await in the first round of the two-game stage of the state tournament series, earning that spot with a 5-1 victory over Lawrence North in that regional. No.2 Roncalli (a 9-0 winner over Avon) and Columbus North (a 6-0 winner over Center Grove) will collide in the other semifinal.